There is a reason they are called "pajama" pants!!!  Anything with the word "pajama" in the front, should not be worn out in public to shop in or take walks in.  I don't care if your sick....if you are well enough to get yourself to the store, you are well enough to change in to regular pants!
With all this said, I just don't understand why people chose to go out in public with "pajama" pants on.  A few day's ago, I was running errands and I saw a scary sight...a man with pajama pants on walking down the road, with nice good pair of shorts over the top of the pajama pants!  Now, I have seen a lot of people wearing pajama pants, but with shorts over them?  Why?
Don't get me wrong here, I like pajama pants, but they are made to wear in the comfort of your home, thus, the name "pajama." 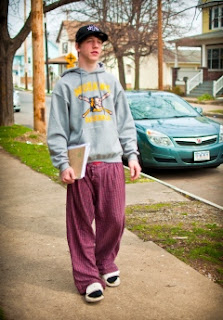 I figure, for some reason pajama pants are confusing to people, that is the only reason I see people out in public in them.  I thought I would do my part and help set the general population straight on this subject matter.  It's a very simple concept, anything with the name "pajama" added to it, is meant to wear at home, not to the store and not for walks in the park or anywhere else. 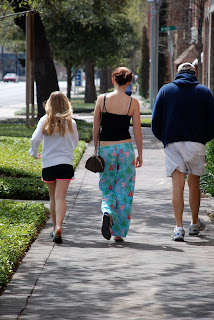 Posted by simplyjulie at 5:14 PM