Uberthons uses Jaguar Timing for chip timing for this event.
There will be a water and a Gatorade station out on the course and
at the finish line.  Everyone will pass the aid station every 1.55
miles running/walking the 5k, 10k 15k or Relay.  Feel free to bring
your little ones in strollers.  You will just be asked to start in the
back.  Please leave dogs home for this race.  No dogs will be
allowed.

I have run this race the last couple years.  I always bring friends
and we have a blast.  It's a very fun atmosphere with great food at
the end.  Uberthons also has really cool medals.  They will be
handed out to all finishers!

These are some fun
times from last year!
Hope to see you this
year on March 14th!

Posted by simplyjulie at 9:29 PM No comments: 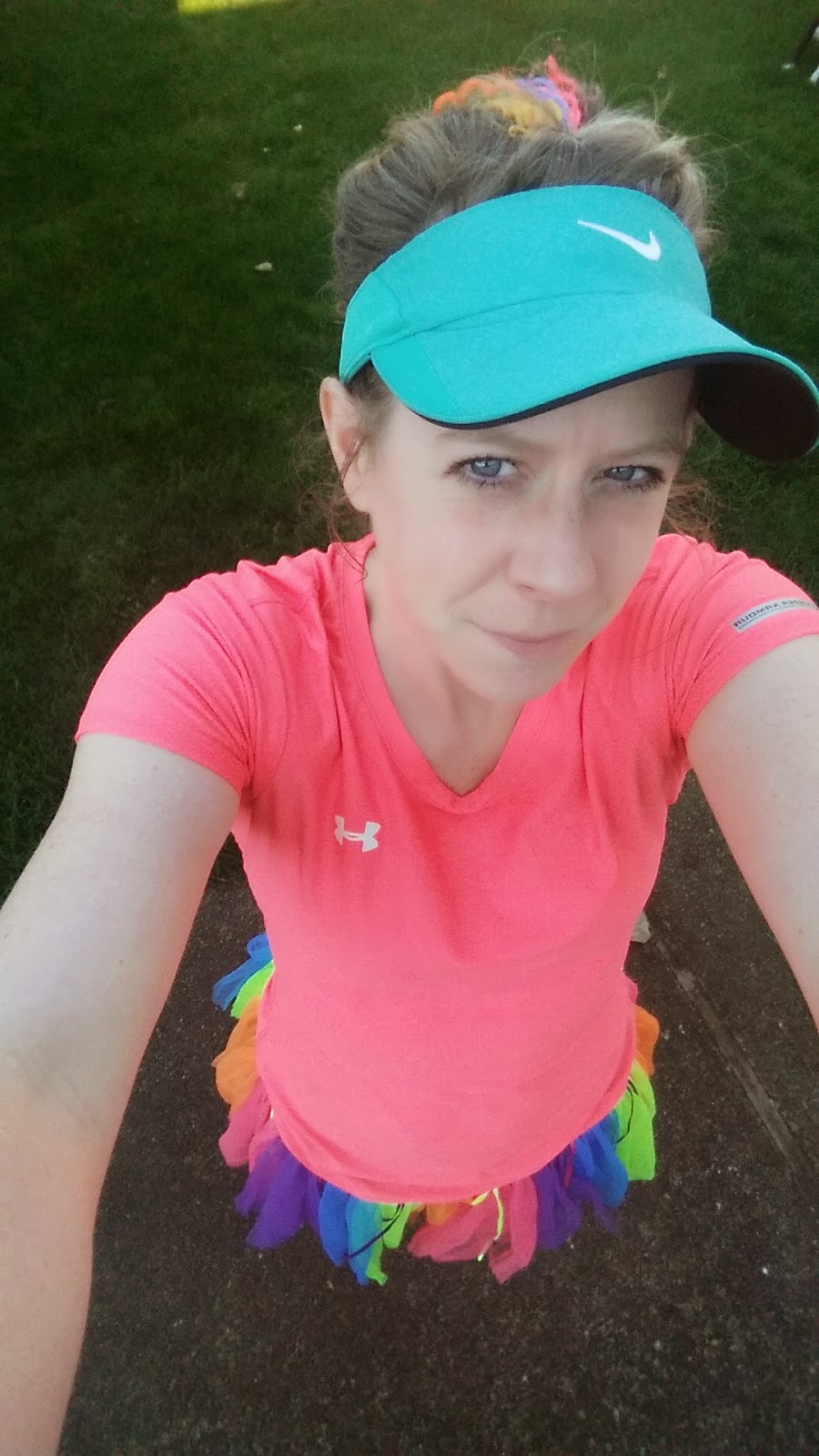 Saturday February 21st I headed to Chrystal Lake Park in Corvallis OR to run "Run your tutu off 5k"
I got to the park at 9:30 to meet my friends.  We went and got our running bibs and still had time to go back to our cars to get rid of jackets/etc.  I was really glad parking was so close.

Shortly after 10:00 we lined up on the paved walking path to hear instructions and get started.  There were men, women, walkers, runners, children and doggies all dressed in colorful tutu's ready to get moving. My friend brought her little Boston Lucy.  Lucy was the cutest little thing out there!  Lucy even won a trophy and was the first dog to cross the finish line!  She is a master dog runner!!!!


We were off, along with 105 other walker/runners.  My friend Erica and I ran together with Lucy the dog.  We started about half way back into the pack.  We should of started up front.  We had to make our way around walkers.  I know better than this, but forgot to get up towards the front this day. 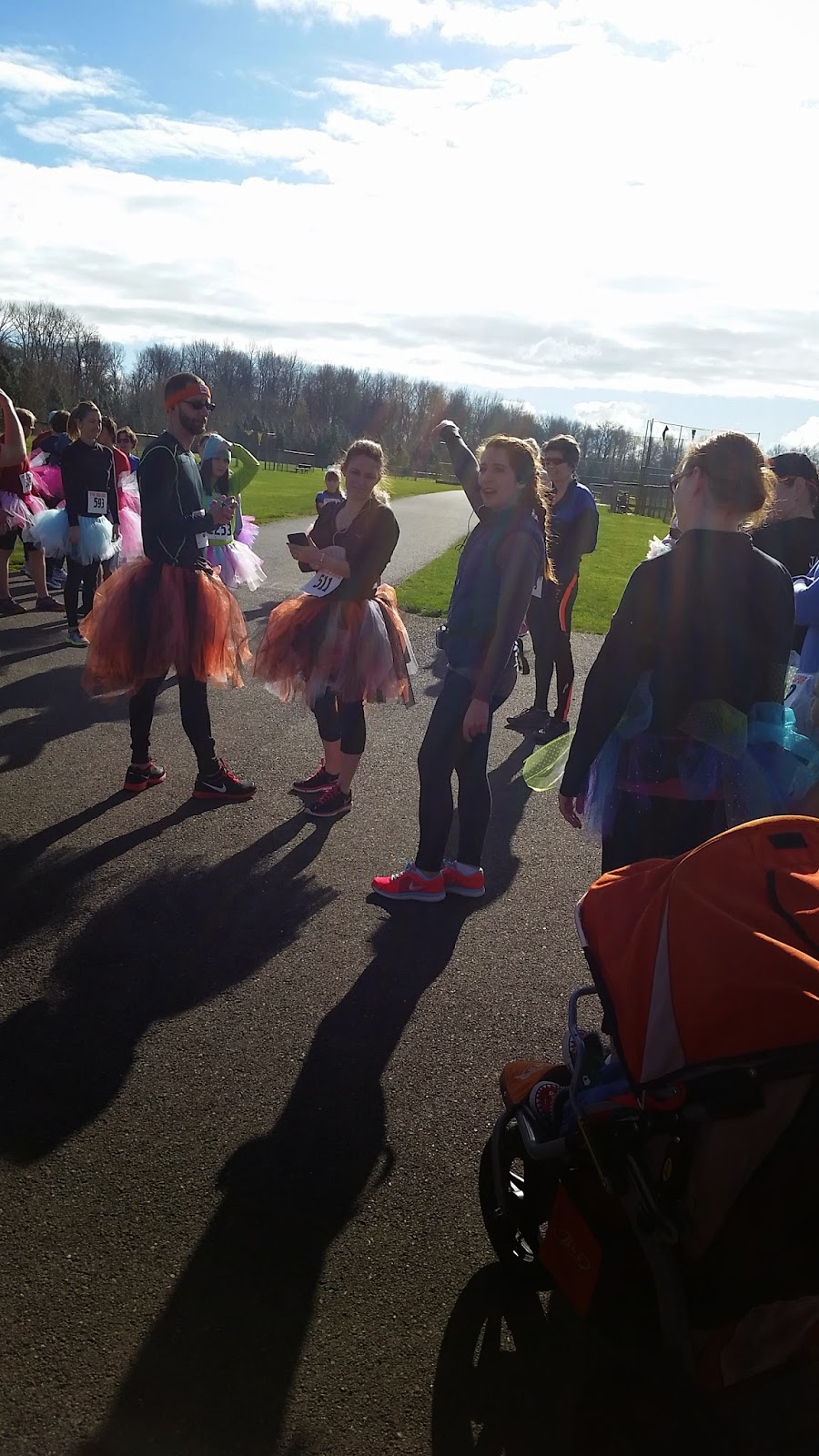 We ran on a smooth paved path the whole 3.1 miles.  We ran along part of the Willamette River.  It was a chilly but sunny beautiful Oregon morning.  Perfect running weather. There were people along the course holding signs, cheering us on as we ran by.

About mile 1.5 or 2 we came to some rolling hills.  At the top of the last hill was a water station and the turn-a-round.  The turn-a-round was a little over half way.  I loved turning around.  We got to see all the other runners, walkers and doggies go by.  It was a fun atmosphere. 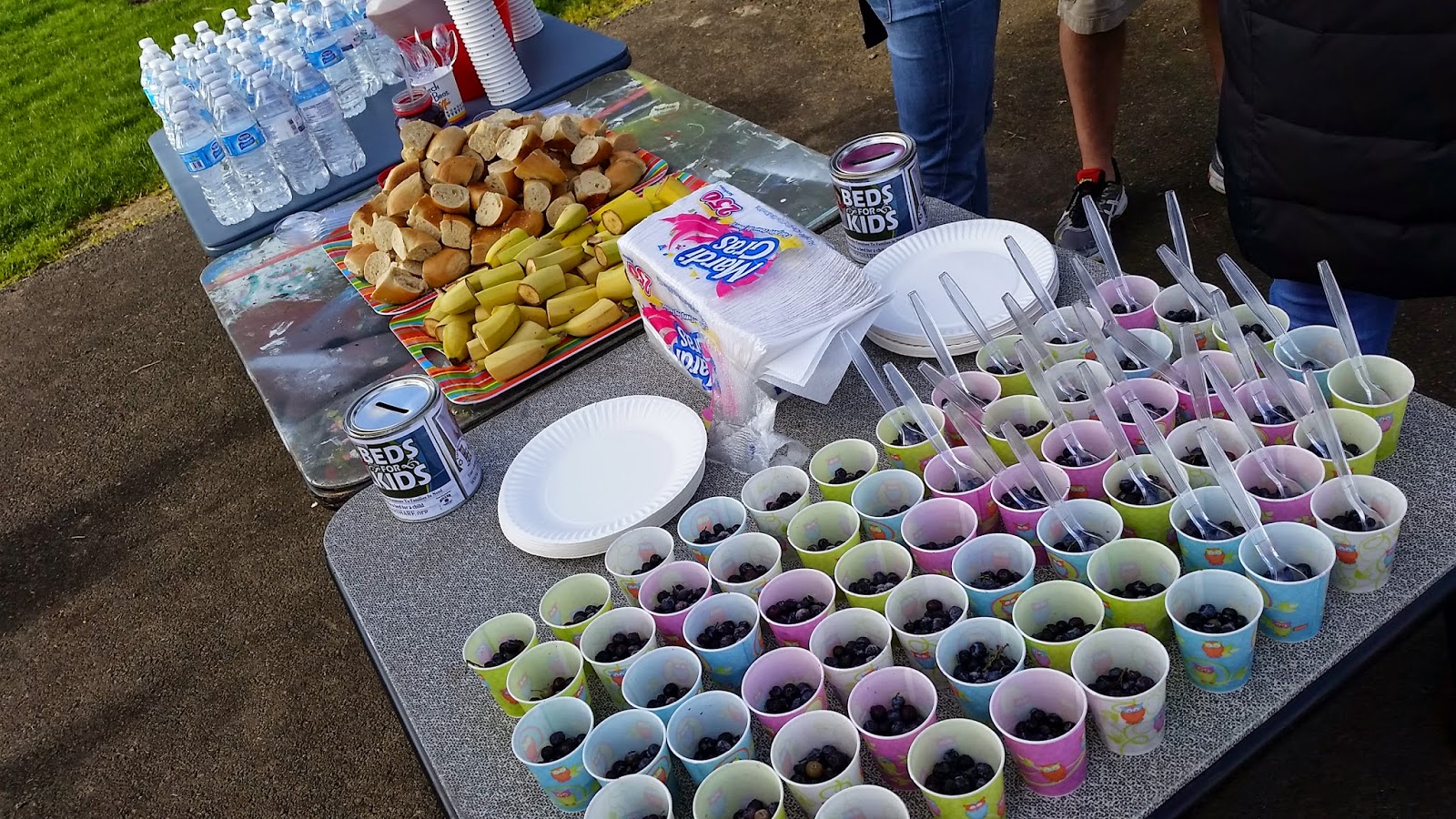 The finish line was about a quarter mile from where we started from.  We got a little cool down walk back to the vendor/registration area.  It was nice and relaxing at this park so I didn't mind at all.

We were handed a goody bag and checked to see if our bib number won any prizes.  There were prizes like gift cards to sports authority.  There were some prize trophies too.  They were handmade and super cute.

Erika gave Lucy a dog treat from the doggie station.  We went over to the Zoup table for free samples of three different kinds of delicious soups.  We got a bowl of whatever kind we liked best.  There was also a table with bagels, bananas and blueberries.  Dutch Bros had some drinks available too.

Emily did a fantastic job making this a fun event to come walk, or run with friends.  I like that anyone could do this one.  Men, women, children, doggies, walk or run!  Everyone was welcome!

It was held on Saturday February 21st at Chrystal Lake Park in Corvallis OR. at 10:00 am

Next year mark your calender for the third Saturday in February.  This event will most likely be held at the same spot.

$1900 was raised and went to benefit the Benton Furniture Share.

I recommend this race for 2016 if your looking for a very fun 5k to run or walk with a friend or your dog!  I had a blast running with my friends and I know they feel the same way.

Posted by simplyjulie at 9:43 PM No comments:

The Roaring Run at Roaring River, Half Marathon Review 1/31/2015 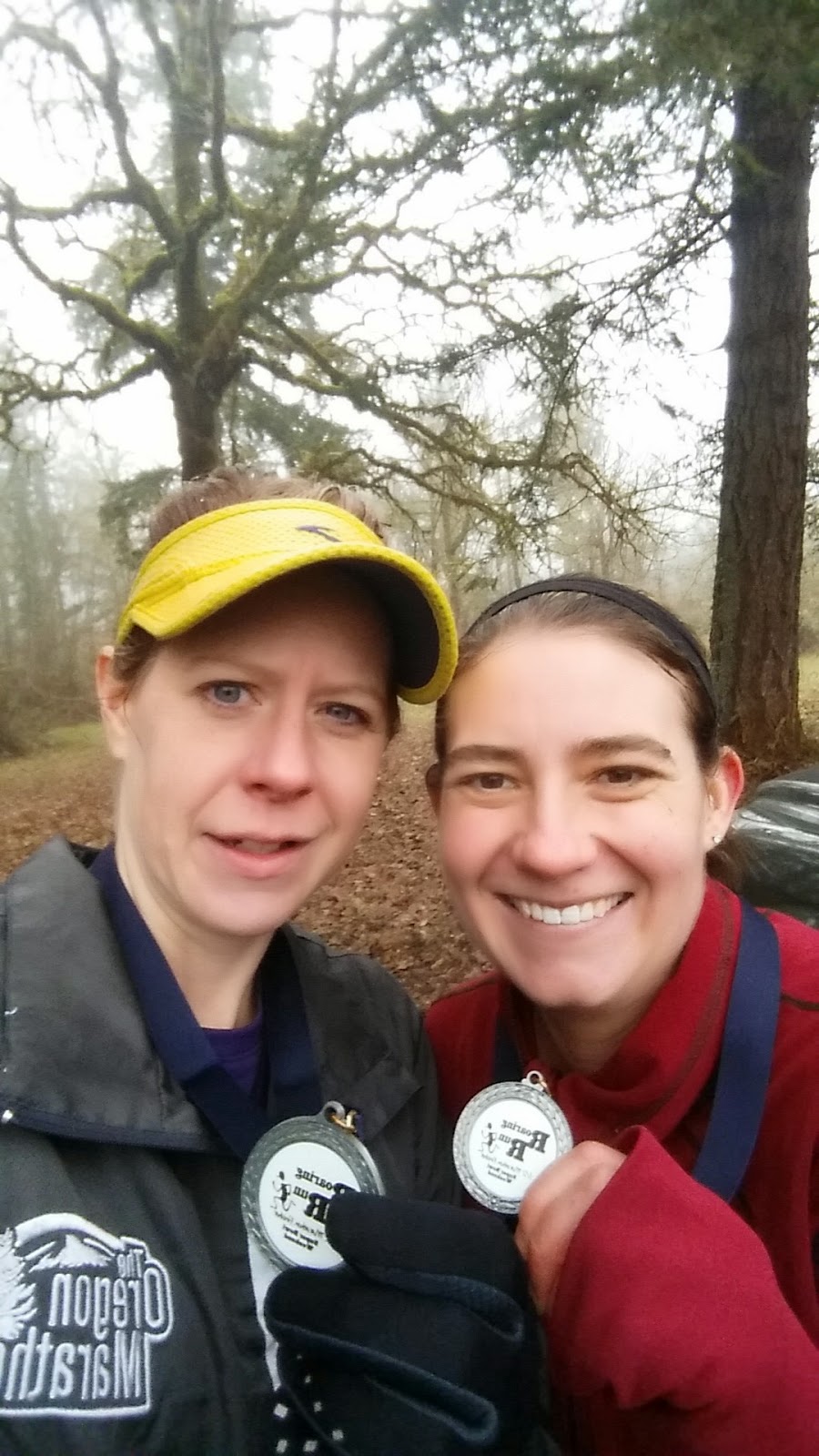 Awards were promptly at 11:00 am.  There were age group winners who received 1st, 2nd and 3rd place ribbons.  There were fun prizes given out if your bib number was on a mile marker or if you guess the "theme" of the music playing at each mile maker.  The theme was "weather."  Whoever guessed got put into a drawing and a winner was picked.  They won an I pod shuffle.   My friends bib number was out on a mile maker.  They were giving out t-shirts but didn't have her size.  She ended up with a entry for next years race....nice, very very nice!!!!

The course was chip timed and the Half Marathon Course was USTF certified! 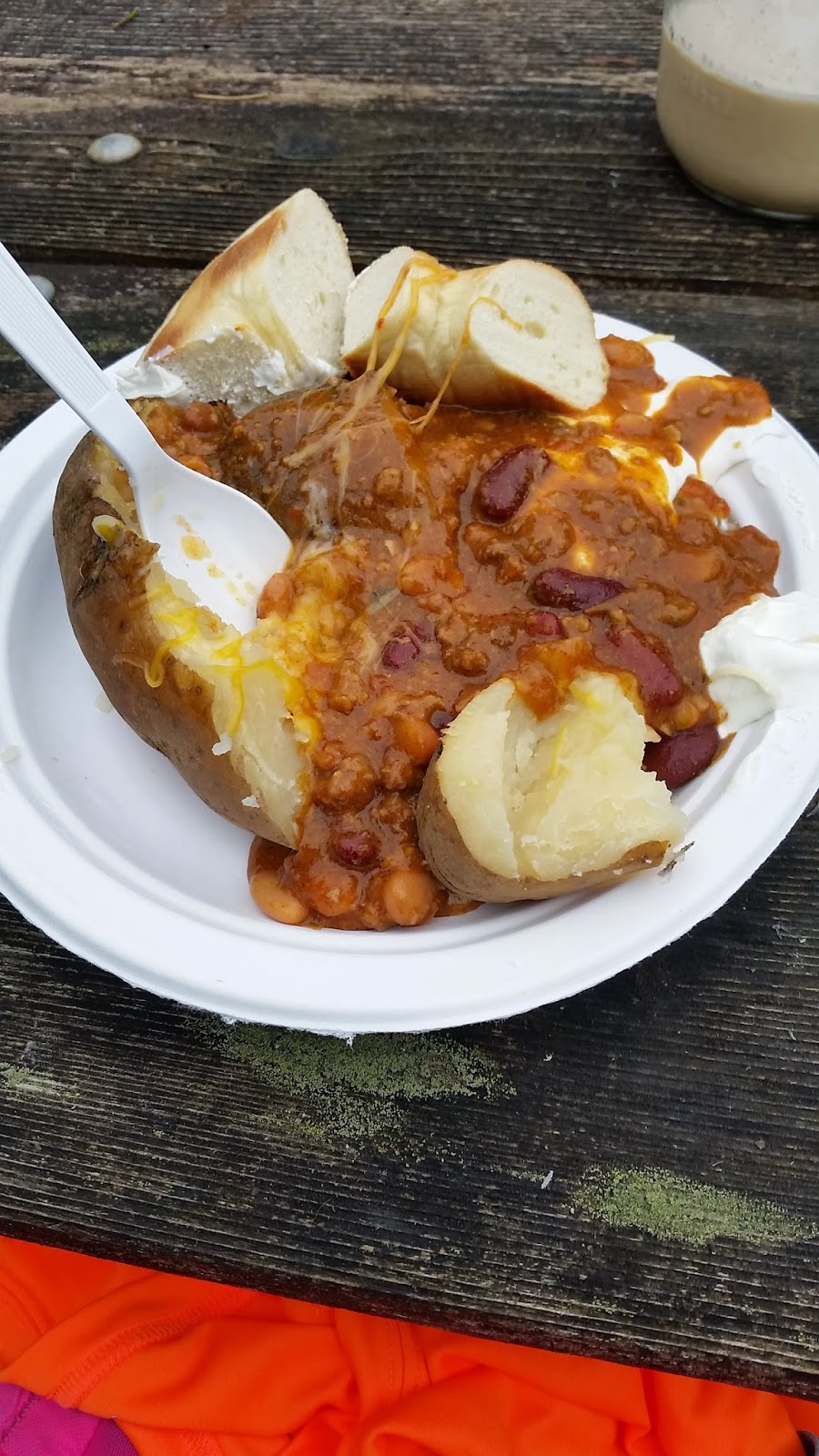 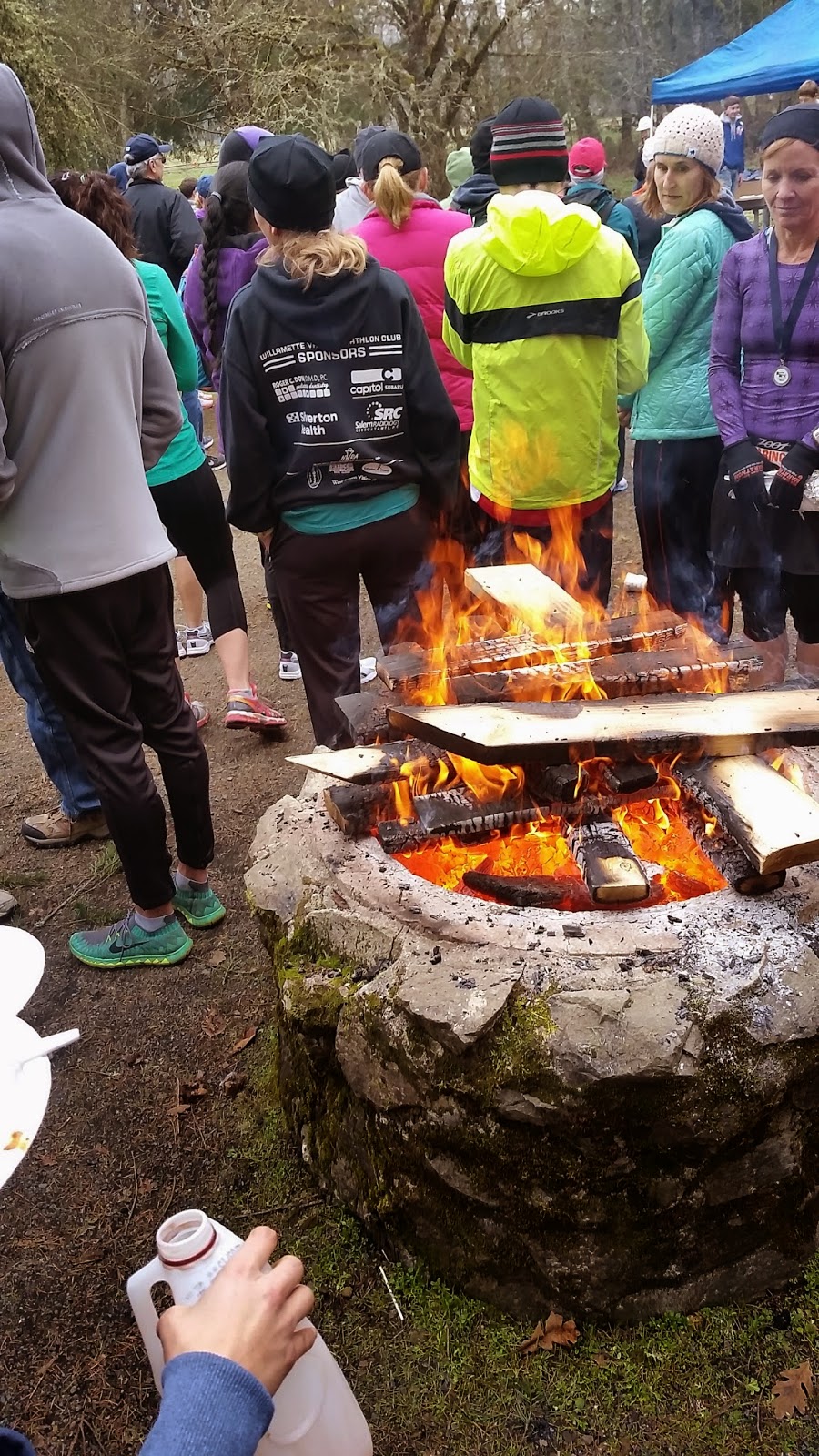 There was limited parking at the park so they offered parking at Lacomb School.  At least two buses were going back and forth (every 15 mins) before and after the race.  I parked at the school and road the shuttle to the park.  It was very cold that morning and the bus was nice and warm!

A bag check was offered near the finish line. 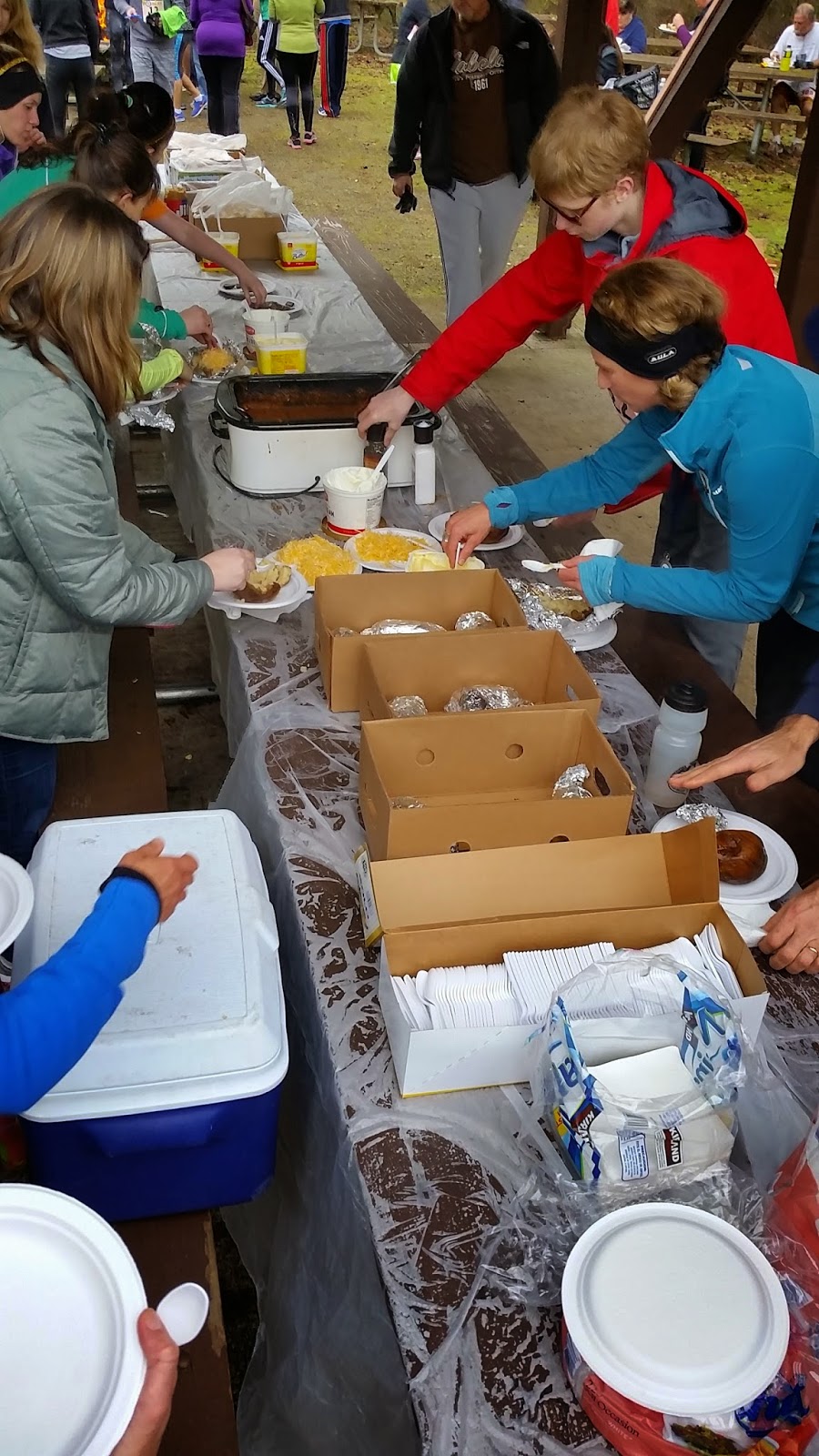 All finishers received a finishers medal and got to enjoy Dutch Bros. chocolate milk, a hot potato bar, orange slices and bagels.

A big fire was burning keeping us cold runners warm after the race.

My side of the race!
It was a very cold foggy morning.  It was colder than I expected it to be but I run better in colder weather, so maybe that's a plus!  My husband and I both were going to run the half marathon.  We parked at the school and rode the shuttle over to the park.  Our friends got there early and parked in the park.  The shuttle bus ride was a few miles.  We were dropped off in time to use the port a potties before taking off.
Packet pick up was going on over near the finish line.  My friends had already picked up our packet, so we were good to go!
9:00 am came quickly.  My friends Erika, John and Emily were also running the half with Jerry (my husband) and I.
Eric was running the 10k a half hour later so he took all our extra layers back to the car before he started at 10.  It was so cold the tips of my toes felt frozen.
As soon as we started running I forgot about my cold toes.  We started on Fish Hatchery Road.  It was calm and beautiful.  We ran about 3/4 of a mile out, then ran back to where we started.  Then kept going out from there.  It was a very large loop course.  I was worried the short out-and-back may get congested but it didn't at all.  The road was plenty wide.  As the other runners went by I looked for my friends and gave them all a thumbs up!  We were just getting started!!!
I planned on using this race as a faster "tempo" run.  I wanted to hold a 8:00-8:10 pace for the first 10 miles, then see how the last 3.1 miles goes when I get there!  There was a few inclines in the road but I was doing well.  My pace was under an 8:00 and I was feeling pretty good.
About mile 4 there was a water station.  I chose not to stop for water.  I ran on wondering how long I could keep up this pace.
About mile 7 we turned onto Richardson Gap Road.  I felt like there was a slight headwind on the road and I also felt like the elevation was starting to go up.  In other words, it was starting to feel hard to keep up my tempo pace.
It was very foggy but that didn't bother me.  I just took it mile by mile.  Looking for my bib number at every mile marker to see if I won a prize.  It was how I kept my brain busy out there all alone.  I didn't have anyone close with me this time to pace with.  I will typically pick a person or two to pace with during half marathons, but the others were too far ahead or behind for that to work this time.
I saw several farm animals out, even in the foggy coldness!  I just kept moving forward.  Finally I got to mile marker 10.  My tempo run was done.  Now I took a minute to talk to myself.  Was I going to speed up, slow down, or just maintain the pace into the finish line.  I had just over 3 miles left to go.
Since it felt as if we were going uphill slightly, I decided maintaining was the best I could do at the moment.
About mile 11.5 or 12 I took my gloves off.  I needed some fresh air to finish strong (I know this sounds silly, but that's how I felt at the time).  Soon I saw Eric.  He has finished his 10k and was looking for his wife Erika.  He took my gloves and I found out he ran his best 10k ever (a PR for Eric)!!!  He ran on to find Erika.  It was just the boost I needed to finish with a little more kick!  Seeing a friend on the course is such a nice thing when you are getting tired!
I went over a beautiful covered bride.  A school band was playing and the beat of the drums helped me speed up.  I was feeling really good! 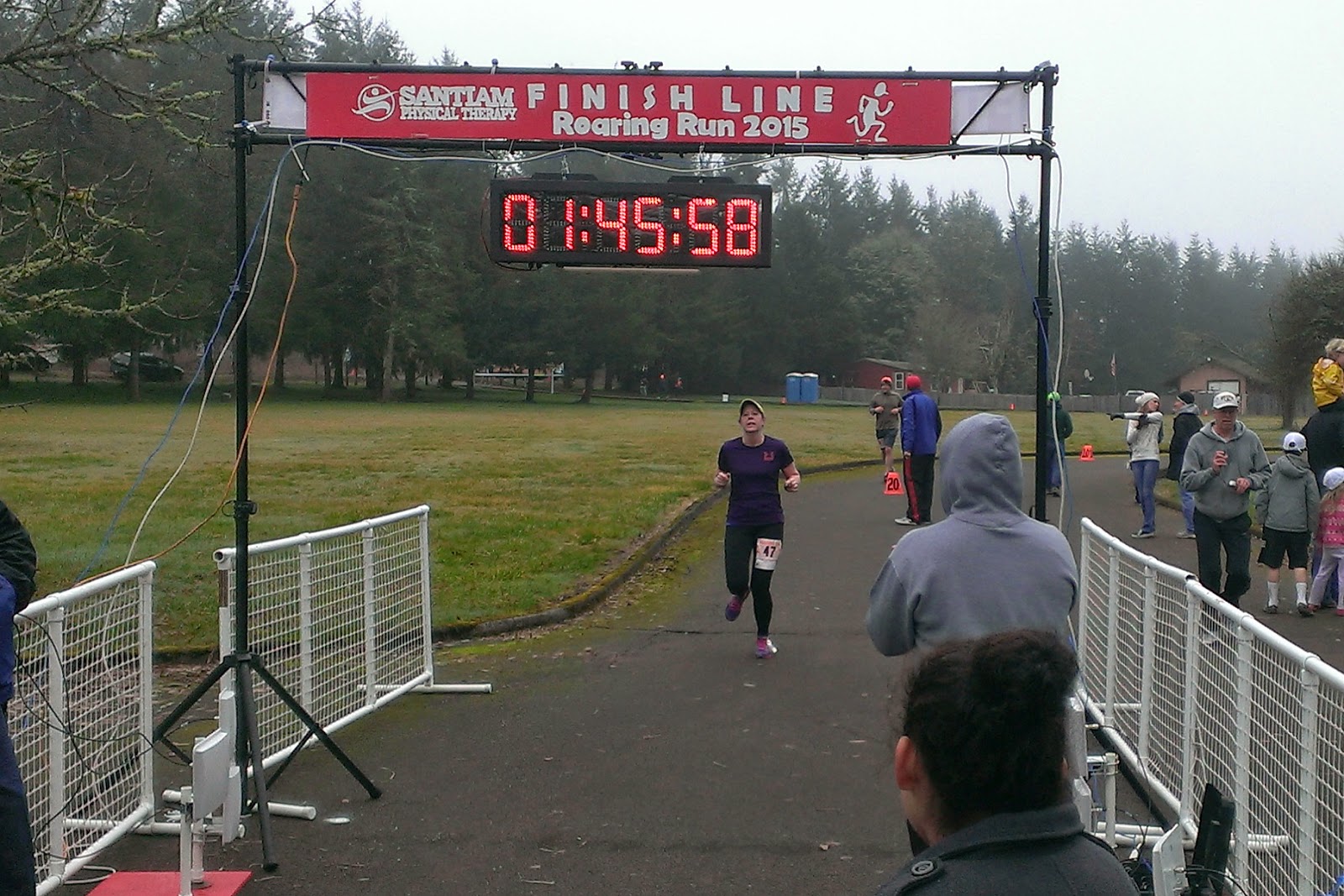 Then the last little hill came.  There was no more music, my friend was gone...just me and a line of parked cars and a hill!!!!  I could hear the announcer at the finish line.  Soon, I took a right into the park. There it was, the finish line!  Still very foggy and very cold, I was done!  I had just PRed by 3.5 minutes! My husband was waiting for me!
He got my jacket and we grabbed an orange and some water.  Off we went to look for Erika and John who were hoping to break 2 hrs today for the first time!
I ran into Susan (another running friend) who had finished the half.  I always love seeing her at races!
Soon I saw Erika coming around the parking lot!  She was MOVING, but I couldn't see the clock to know if she was under 2 hrs or not!
I headed to the finish line and sure enough, she made it, just under 2 hrs.  So did her brother John!  GREAT job you guys!

This is a race I would recommend for your 2016 race calender.  The price is affordable, its a fundraiser for Lebanon Cross Country team.  Its a great country course.  It's got a fun finisher atmosphere with fun prizes.  It even ends with a meal!  The hot potatoes and chili was a nice bonus!  This is already on my list for next year with my friends! Hope you can join us!

Follow me at ZaoFit. If your in the Dallas/Salem area, we often have free group long runs on the weekend.

Posted by simplyjulie at 6:06 PM No comments: