Last Sunday July 30th I joined some friends at Bush Park for Salem's very first ultra timed race "Angry Owl Ultra"  We were greeted by race director Josh Christensen. The sun had just come up and the weather was a comfortable 60 degrees.

Angry Owl is a Crusty Cap event.  The name "Angry Owl" comes from a series of Owl attacks on runners in Bush Park a few years back.  Read more about that here!

Angry Owl Ultra is my first "timed" race.  I signed up for the six hour race.  There was also a twelve hour and a one hour. I had a good group of friends running that day.  I had a goal in mind....  50k (31.5 miles).  This would be my second attempt to run this distance and I really had no idea how the day would turn out.  Thankfully I hadn't thought too much about it being Summer! The heat does scare me but I was excited about this event, so my mind hadn't gone there yet!

We all started and finished on the derby track behind the stadium. From there we did a loop through Bush Park.  The loop was just over a mile around, so this loop was ran over and over again for hours. As boring as that sounds, it wasn't!!!

We had a mix of hard packed dirt, non-technical trail loaded with trees (shade!). Grass, packed gravel, and asphalt.  Each loop around we went back by the start/finish line.  There was a wonderful fuel station here loaded with all kinds of snacks and water.

The first hour went by so fast! My running group started together.  It felt like a weekend long run!  We casually chatted at a very comfortable pace.  My friend Kristi had signed up for the hour and told me she was going to stay with me that first hour!  We ran six laps together before her time was up!  As I left to start my 7th lap, I ran alone.  I felt like I was just starting! It was now a sunny 63 degrees.  I was feeling very good and felt I was off to a good start.

Some things I learned Sunday!
1)  A loop event is a good idea.
When my husband and I went to help crew our friend Chris for Pac Rim a few years ago, I was introduced to the timed ultra loop race.  My first thought was never.  Running a loop around a park for hours and hours would be the worst. As we ran with Chris that day, I was inspired to do a race like this someday.  At Angry Owl I discovered for myself how great the loop was.
2) Every mile we had access to food and water.
3) Friends and family knew where to find us.
4) The course was easy to figure out.
After running the loop a time or two, bingo...no getting lost!
5) I knew if I got too hot or tired, I wouldn't be stuck out on the course with no help.
6) I got to run with everyone!
From the fasted people out there, to the slowest...we all ran together.  We would lap each other and give each other shout outs as we went by.  Everyone was so friendly.
7) I made a few new friends.
Since we were seeing the same faces over and over people start visiting.  I felt like people visited more in this race than any other race I have ran.  I met Randall from Newport.  My Hoka friend. Flag guy (later found out his name is Dean).  Ultra runner Pam Smith.  Pam just recently ran on the 2017 USA Women's National 24 hour running team.  It was a privilege to run a lap with her.  She is very encouraging and took the time to get to know many of us runners that day by name!

Hour three!  It was now a sunny 70 degrees.  I was still running pretty comfortable.  It was nice to know there was shade for every loop.  As we came into the sun, there was a little breeze.  Then the fuel station.  I simply kept going!

Every hour I would stop and refuel my water bottle.  I poured carbo-pro into my handheld, a volunteer topped it off with cold water, and I would grab a salt tab and go.  That was it for the first four hours.

My stomach had been giving my issues since we started the race.  I blamed the burger and fries I ate the night before (I know better), but then again, it's one of the mysteries of running.  Sometime the stomach issues are hard to figure out.

Five hours.  It was now in the upper 70's.  I never felt overheated but I could feel the effects of the warmer weather.  I started filling by handheld up about every two miles now.  I also started eating the watermelon at the fueling station.  Every time I ate one, it tasted like the best watermelon in the whole world.

The last hour and a half!  I remember hitting mile 26.2.   I was in the woodsy part of the park and Pam Smith happened to be with me. I told her, I just past the marathon mark.  I'm now running farther than I ever have before.  I was excited but also a little intimidated at what this last hour would bring. I was feeling very warm, my feet were starting to hurt really bad and I was hungry!

As I came around the the start/finish I remember seeing my friend Jeanne who was there with her husband Chris and our group from Dallas.  I said hi to her as I ran by and said, "I'm going to just keep putting one foot in front of the other."  That's what Jeanne's cousin Lori had said before the race!  She was also out there running the six hour race for the first time!

I did just that, one foot in front of the other, just keep moving forward.  I allowed myself to slow down, but no quitting.  In a race like this, you can stop and end your laps at any point, but I couldn't stop yet.  I hadn't got to 50k yet.

Back on the Leffelle St. side of the loop Team RWB had a little coffee station set up.  As I looped the course over and over I couldn't help but talk to the people at the station.  They had a huge American flag and I see them running in races all the time, carrying the flag! Air Force Vet, Dean Chambers was carrying the flag that day.  He ran a loop with my friends and me whenever we asked him too.  He also ran my final two laps with me that day.  He helped me forget about the pain my feet were feeling, how my legs were cramping and how hot it was getting.  I think I stopped and walked once during those last two miles.  It was just for about 30-60 sec.  Dean ran with the American flag through the finish line as I finished my first six hour race, completing my goal of a 50k!  My friends Chris and Stacie McGraw and Kristi Clack were back after running the hour race at 6am.  I was so glad to be done!  It was now climbing into the 80s.  I was thankful I wasn't doing the 12 hour race, as it got up into the 90s that day!

My friends and I ended our run with good food (the best part)!

I did have stomach issues for a couple days.  I wasn't that sore the following days.  I think going the slower pace for a longer run helped my body not "overdo" it.  It was a great experience.  I will be back for more next year!

Thank you Josh for bringing the Ultra to Salem.  It was well organized, well marked and a great experience. 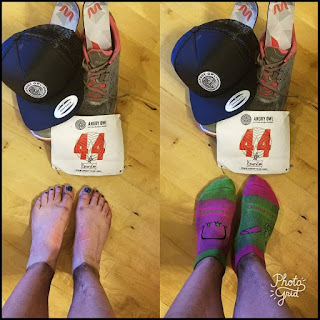 Dean Chambers Bonus Story!
As mentioned in my blog, I met Air Force Vet Dean Chambers.  Often when running with people you learn part of their story!  Dean just so happens to have an story I thought my readers would want to hear!
Enjoy!