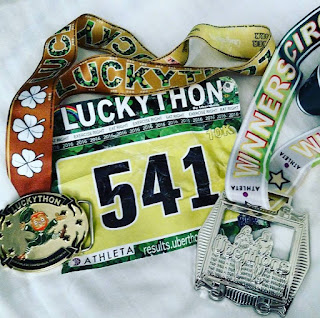 Saturday March 12th was my 4th time running Uberthons Luckython.  I have always ran the 5k, but I ran the 10k this year.  I've been running since Oct 2008 and had yet to run an official 10k!

Place:  The Reserve Vineards and Golf Club in Aloha, OR

All finishers received an awesome Luckython Belt-buckle Medal and a trip through the Potato Bar.
There were plenty of tables and chairs under the large tent for finishers to eat and find out race results.  The three tall heaters where a plus on this windy wet morning. 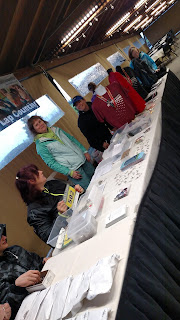 I arrived early Saturday to help with a few things. Many volunteers were already there setting up.  It was wet and windy but there was a nice set up inside the tent! I helped with selling Uberthons gear!  They have some awesome shirts, a jacket, scarves, hats and athletic socks you can purchase at any Uberthons race. 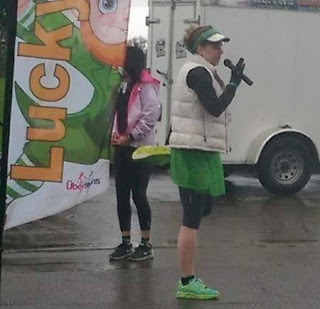 I got to lead the walkers and runners in a few pre-race stretching.  This ended up being a lot of fun!  It was chilly, so moving around to get warmed up felt really good. The 8:00 walker/runners took off and then we got the 9:00 walker/runners checked in and ready to go! 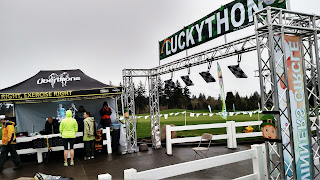 9:00 am was when my race stated (the 10k).  I always like to come up with some sort of goal pace/time.  Today I just thought 48:00 minutes because that's what my Hood to Coast Captain threw out as a guess for my time.  This just happens to be Uberthons Alan!  The 10k was two large loops around the paved golf course (south side).  I wore my rain jacket because I was so cold at the starting line.  After mile one, I knew that wearing the jacket was a very bad idea!  There was a few small rolling hills during the first mile, then it started to even out.  At mile two, I took my race bib off so I could remove my jacket and gloves.  I know better than to overdress for a
race, so I was very irritated at myself! 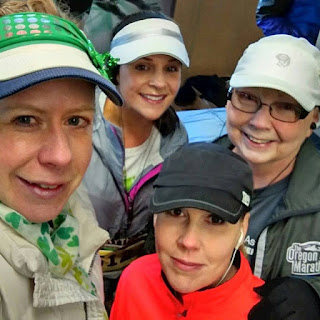 As I came around to the finish line for the 5k, I handed off my jacket and gloves to a lady who was helping out, giving runners directions.  She gladly took my stuff and pointed me in the right direction.  Doing the loop again.  I felt much better without my jacket and gloves but had dropped my safety pins.  I had to carry my bib but I didn't mind.  Was glad to have that jacket off!  Now, the temperature felt perfect for racing.
It was about 42-44 degrees, with some wind and rain.  There were some puddles out on the course, but it wasn't that bad.  I dipped down into the rollers a second time and knew I only had about two miles left.  I was feeling pretty good with my pace. 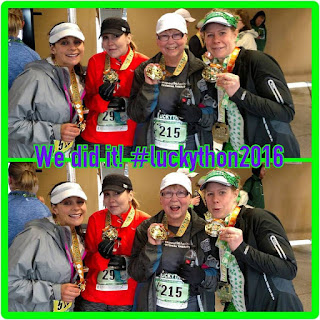 As I came around for that last mile, I was pretty sure I was in second place for female finishers but there was a lady not too far behind me.
I tried to keep my pace steady, to keep her from getting any closer. I ran through that finish line with a time of exactly 48:00 minutes. I couldn't believe it!  It was my exact goal time! 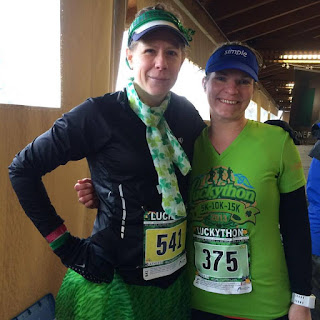 I went to the tent to eat and potato and be with some friends.
My husband lead the kids race at 10:00.  It was raining even harder at this time, but the kids didn't seem to mind!
Uberthon's Darwin was back at the tent giving out age group winner medals and making announcements on upcoming Uberthons events!

There are LOTS of fun Uberthons races already planned for 2016.  Check them out HERE!  I would love to meet you!

“This was my very first Uberthons race. I thought it was extremely well put on and I loved that it wasn’t too crowded. Everyone was very friendly and I love the medal/belt buckle, such a cool idea! The baked potato bar was a great touch as it warmed our bellies after racing across the finish line in the cold, rainy weather. Overall, I was very happy I attended and I am already putting several more Uberthons races on my calendar in the near future. My daughter is hoping to join me as well!”  ~Kristi Clack (1st time running an Uberthons event) 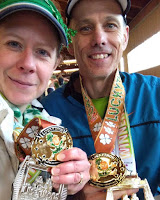 Posted by simplyjulie at 9:46 PM