BQ (Boston Qualifier). I choose The Oregon Marathon on the Banks to Vernonia trail. This marathon is put on by Uberthons. 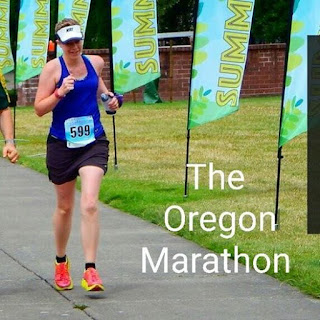 Uberthons races are my favorite! I ran this race 2013. It was the year of the Typoonathon. It was a very stormy race!  I have always wanted to go back and run that trail again under better training and better weather!  That did happened Saturday!

Uberthons offered a bib pick up on Thursday before the race.  My husband and I went to this and helped hand out goody bags, shirts, and answer questions the runner had.  I was so glad to be able to do this.  It was fun to talk to people and learn where they were from.  It helped me get pumped for Saturday's race.

Saturday came. Jerry and I were up early! We arrived at Greenville Park in Banks, OR about 5:20 am.  We saw the finish line sitting there just waiting! It was so calm! It was a beautiful Oregon morning!

We decided to get loaded onto a bus and get to the starting line as soon as possible.

The bus ride wasn't bad. We arrived at Vernonia High School around 6:15am.  It was light out, 51 degrees with a very light mist! I went into the school and used the restrooms. I sat outside and talked to a guy who was running his 69th marathon today! He said he is five states away from running a marathon in every state.  He took off with the early starters at 6:30am.  I used the restroom again and then got my stuff to bag check.  There was a wonderful group of kids helping with bag check.  I was so impressed with them, they were so excited to help! Before long, it was almost 7:00 am and time to line up. All I felt was, I'm ready for this!
We were off.....

As we took off I felt
comfortable.  I remembered lots of the course from 2013 and I felt calm. We ran a short loop around the front of the school and then out on the road.

Soon we were running around Vernonia lake. I had split the race up in my head.  I knew by the end of the lake we would be at about mile three.  This was just the beginning of the marathon.  A warm up before heading out onto the Banks to Vernonia Trail. The plan was to get comfortable and run my tempo pace. My tempo pace is suppose to be between a 8:10 and an 8:15 min/mi.  I was going a little fast, but I didn't feel stressed.  It was only mile three!  I did need to slow it down a little. 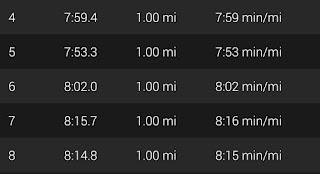 Next break up in my head, mile four to eight.  This would be fairly flat miles.  I could just run a comfortable tempo and stay calm. These miles should be very simple and non stressful.
I continued to go slightly too fast, then got it under control about mile seven. I was feeling very very good.  I was excited to know I was a little ahead on pace because I knew the hard part of the course was coming up. 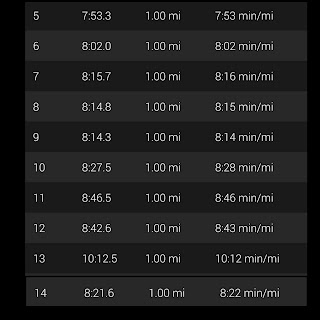 Miles nine to thirteen/fourteen I knew could give me problems.  At mile eight the course started going uphill slightly for several miles ending with two steep switchback, crossing a road then heading up a pretty steep section for about three-fourths of a mile.  I knew I would be slowing down for some of this.
As I started into mile eight I tried to really focus in. The mental part of running is so important and can make or break a race.  Mile after mile, I was surprised at how well I was holding it together. I saw a penny.  My rule is to never stop for #foundchange while racing.  I kept going! I continued to feel really good.  My pace slipped slightly from mile ten to twelve as expected, but I was prepared for that.  It was up-hill after all.  Mile thirteen was the steeper uphill right after the switchbacks.  My heart was pounding going up the steep part of the hill.  I needed to add some carb-pro to my water bottle and get a salt pill to take at the next water station.  I walked for a second for the first time.  I got my heart rate back down, and got adjusted and started running again at the top of the hill. I was feeling great!!!! I knew the faster part of the course was just ahead! 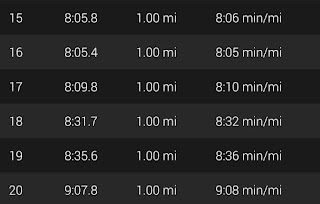 I was looking forward to miles fifteen to twenty!  This was a gradual downhill.  It should be easy to get back to my tempo marathon pace!  Maybe even make up some of that up-hill lost time.  As I begin to speed back up I felt good for the most part.  I was back on track and feeling like I was going to make my goal of 3:40.  I even had thoughts of possibly beating my goal time.  I was really happy. I saw another penny!  I ran on passed it!  Wasn't worth the seconds to stop for it!  By this time the runners had spread out. I was pretty alone on the course.  I was passing an occasional early starter and tried to say hello to each and every one of them.  Everyone seemed to be doing well, and in good spirits.  My plan right now was just to run to mile twenty.  I knew around twenty would be a water/nuun/ice towel station, followed by a short out and back on Sell road.
At mile nineteen I started for feel off.  It worried me slightly.  I had to remind myself, I was almost there, just make it to twenty...then,  just run it in!  If only it were that easy!!!!

As I went past the aid station, I quickly added water to my hand-held and took a ice towel. The cold towel felt so good on the back of my neck, then I dropped it!  There was no way I was stopping to pick it up, so I ran on.  I was starting to hurt! I headed out onto sell road.  I saw a person or two going the other way on the out-and-back.  All men!  An early marathon starter had told me I was third female a few miles back.  The first two females were too far ahead to see.

Mile twenty-one! I began to hurt even worse.  My legs!  I heard some heavy breathing coming up on my tail.  Nobody had passed me for miles!  It was a tall lady in red.  She, was so excited as she came up on me. She said, "I've been chasing you since mile two! I finally caught up with you!"  I told her she was now the third women and I struggled on.  I couldn't go.  Shortly later, one more person passed me, another women! 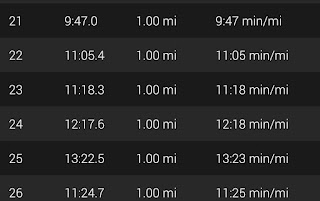 Things began to get painfully worse.  I felt as if I needed to puke.  I stopped for a second and just dry heaved.  There were blackberries along the trail.  I wanted to stop and eat them but I knew better.   I was hungry and thirsty.  I had water but when I drank, I mostly just spit it out.  I didn't feel dehydrated, just exhausted.  It had gotten rather muggy out.  A few men passed me coming out of the trail onto the sidewalk in Banks.  One was really nice and encouraged me to finish under four hours.  By this time, there were lots of walkers. They were either from the early marathon start or the half marathon.  It didn't matter, it was just was nice seeing other people out there trucking away, making their way to the finish line! Miles 24, 25, and 26 were extremely painful.  Those miles not only were painful to my body, but to my mind as well.  I just didn't have it in me!  The painful truth hit.  I was very well trained for a good 20 mile race, but very under trained for a 26.2 mile race.
In distance running there is no "luck." You get what you train for.  I knew where I fell short over the last four-five months.  I know what I have to improve on! 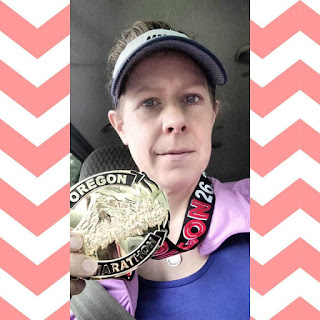 I ended The Oregon Marathon with a 3:57:04 (9:02 pace) time.  I came in fifth overall female, and first in my age group.  I PRed the course but It was NOT a lifetime PR.  I have ran two other marathons faster.  I would be lying if I said I wasn't disappointed.  I was disappointed. I was also happy.  Many people want to run and can't.  I enjoyed the course and the people out there. I got to run a Summer Marathon for the first time.  I ran on one of the most beautiful courses in Oregon.  I finished my tenth marathon!
I got to train with some of the most awesome and encouraging friends. So, in that, I feel I gained more than I lost.  I didn't BQ, but I WILL try again next year!

My family was waiting for me at the finish line.  I sat in the grass for a long time.  My friend Eileen had made me cookies. I got up and picked them up from the timing tent and found out my official time. Then I had to sit again.  Soon I was able to get up and enchange my race shirt for a different size, then I sat again.  I felt a bit nauseous. 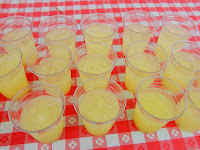 I decided to go to the other side of the finish line where the chairs and shade were and get some iced lemonade. My 12 year old Rylan and I sat and drank the delicious lemonade.  We both got up to use the port-a-potties and I started puking and puking.  My poor Rylan just stood there not knowing if he should
help me or pretend he doesn't know me!  I felt so bad for him!  My Mom got worried and came over with water and told me I needed to drink.  I was fine, really!  Just tired!  My family ate burgers and ice cream and I sat and drank my water, just happy to be done!

Uberthons out did themselves for this race!  They did an excellent job making this race enjoyable for locals and out of state runners.  They set up a family friendly finish line with plenty of food for finishers and family.  They started promptly on time and had volunteers available to answer questions. I used the ice towels at three aid stations.  There was nuun and water readily available numerous times on the course.  I look forward to coming back on July 15th 2017 to PR that course again!!!! 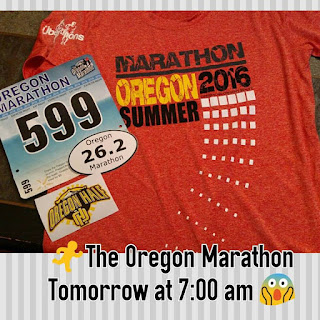 Will you join me? Check out details for
THE OREGON MARATHON ---> HERE <---

Posted by simplyjulie at 8:34 PM