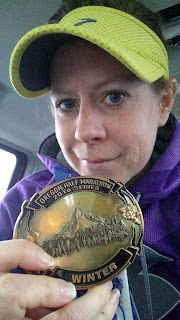 Saturday January 23rd was the first race of the 2016 Oregon Half Marathon Series, the Uberthons Winter Half!

The Winter Half took place at The Reserve Vineyards and Golf Club in Aloha, OR.

All races were open to runners and walkers (3.5 hour limit)

Register for the Oregon Half Marathon Series and save $50.00. You will also get lots of VIP treatment at all of the races...check that out here! 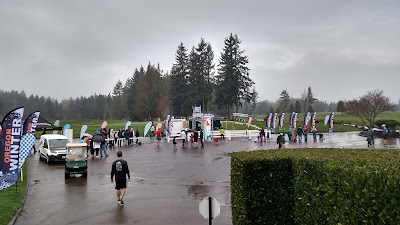 Saturday morning was a little chilly, but not bad for "Oregon Winter!"  Low 40's with a light mist.  I call that, perfect running weather!

Darwin did a great job starting the race with a staggered start.  I started at the end of the first group.  I was worried about feeling blocked in since we were on a golf course, but I didn't feel blocked in at all. There was plenty of
room.  We ran the South and North sides of the golf course.  Some small rollers with plenty of flat spots on a nice paved path that twisted through the golf course.  As I ran along I saw a few people I knew and talked to them.  As we got in a few miles you could see other runners all over the golf course because of the twists and turns.  It was a beautiful neon rainbow of runners!

It began to rain pretty hard!  We ran the course two time for the half marathon.  The first time around there were a few large puddles that were pretty easy to avoid.  I ran through the starting line to start my second loop and looked up at my halfway time and was pleasantly surprised. I haven't done any heavy training for several months so I wasn't sure how today would go!


This time around I was expecting it to be pretty boring, but it wasn't.  I found myself just counting down the last six miles and enjoying the group I was running with.  Often for the second half of a half marathon, there are spots of loneliness.  Not today, there was always a runner by me.  It made the time tick away faster!  The puddles had grown, as the rain had picked up a lot!  It got to the point of just stomping through the puddles because it didn't matter anymore.  We were all soaked! At mile 12, there was a huge puddle!  I jumped right in...lol!  It wasn't that bad, but it was a big puddle!  I came around the the finish and was pleased with my time.  I managed 1st in my age group and got to run with some really awesome people! 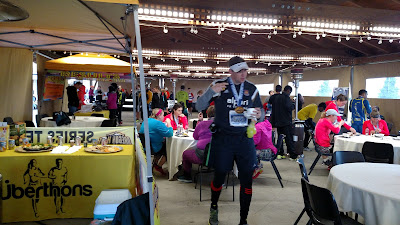 I changed into some dry clothes and joined my husband and daughter for hot soup and rolls in the finish tent!  Uberthons had a couple nice tall heaters to warm up by and plenty of covered seating.

I'm looking forward to the rest of the Uberthons Half Series! Don't miss out, check them out today! Would love to meet you at the next Uberthons event!

Follow me at ZaoFit, I would love to hear your running story!

Posted by simplyjulie at 8:09 PM