This is my first blog this year.  I've had a harder time getting myself mentally "there" since my last marathon in 2013, The Oregon Marathon!   I trained very hard from January '13 to the end of October '13.  I think I just needed a little mental break from full training.  I just have been running for the enjoyment lately!

Things are also changing in my household soon, so my mind is struggling some. But that's okay! One thing is for sure, I have a super support team around me so, a slump, set-back, break, whatever you want to call it...I have hung in there and feel myself coming out of it.

This last weekend sure helped.  My husband and I like to spend our "weekends away" planned around a race(s).  This years pick was Uberthons Luckython 5k and Shamrock Run 15k.

We left on Friday March 14th, and started at the new Road Runner Sports located in Portland.  We meet Uberthons there, and picked up our race packets. They asked us for a short interview update from a challenge we did with them last year.  They always make me feel important!  Then we were off to the Shamrock Sports Expo.  We had plenty of time to walk through the whole Expo and just enjoy the afternoon.


Saturday came and I was nervous for the Luckython 5k.   The race didn't start until 4:00pm.  I was worried it would be too hot. I don't like running 5k's because I want to run them fast and I know it will hurt my insides, ugh!  I couldn't eat too much for breakfast or lunch but had to eat something.  I did a good job, but my nerves just got worse as the day went on.  I became crabby.  Poor Jerry had to listen to me grip and complain for the hours leading up to the race.  He said, "you always do this and then are fine!"  My friend Tonya who was also running the 5k got there about 3:15 and I started telling her my woos.  She said, "you always do this and are fine!"   Hah...what can I say?  I ended up being fine!


I did a slow warm up on the back end of the course.  I learned there was a small hill in the last mile, so I prepared for that in my mind.  As I walked to the starting line, a man said, "Julie."  I said, "do you know me from facebook" (Dallas, OR Run the Open Road)?  He said, no Daily Mile!  Then I realized he was Rob from Daily Mile.  An area runner who is also tracking workouts on the same page.  BTW, Daily Mile is a great way to keep track of your running/walking/biking.  It's free with lots of support from others doing the same thing!  He told me he will be doing Newport Marathon in 2015 because my blog inspired him.  Wow, that's really cool!
People really do read my blog!

It was time to get in the starting line.  Tonya and I needed to be up closer to the front.  There were several walkers and it's not too fun trying to weave around them.  I wasn't expecting a PR (personal record), but I was expecting to run the best I could run on that day!


I must of felt pretty good because I started to weave through people right away and when I looked at my Garmin,  I was running in the 6's.  Yikes!  I knew one thing, if I continue this pace much longer I will feel very sick the last mile.  I slowed down into the 7's and off Tonya went ahead.  I could see her the whole time.  I was hoping to get closer or catch up to her during the last half mile.  It was good to have her as a visual to keep me going.

We were running on a golf course.  We ran on the paved path through beautiful green grass.  Occasionally having to run off the path, into the wet grass to pass people.  It was a little muddy in some spots but soon thinned out enough to not have to go off the path anymore.  It was a beautiful day!


About half way I found myself wanting to walk.  This is about mile 1 1/2.   This is sad for me because I am a distant runner.  I am just past mile one and I want to walk???  Oh poor Julie!  I remembered something Tonya said about hanging in for 3 fast miles and I kept going, feeling slightly sorry for myself.  I really don't like 5k's...never have, but somehow find myself running them!  As I went into the last mile I knew there was going to be a downhill and then an uphill before the finish.  I was feeling better now and climbing out of that hill! Then I started to feel nauseated.  It took all the energy I had to run up that hill, but I was still running, knowing the end was very near!
I soon saw Tonya on the sideline doubled over in the grass. I knew she was trowing up!  Poor girl, but that means she was going super fast!  I passed her and then she caught right back up and passed me back.  We only had about a quarter mile left till the finish line and Tonya stopped again and doubled over!  I felt bad for her, but knew she wouldn't want me to stop, so I passed by her and finished up with a time of 24:54.  :54 sec short of a PR.  I placed 2nd in my age-group/gender, 3rd in my age-group including men! Hah!!!!   Well, one thing is for sure....  I ran this race the best I could and had a blast doing it...once the nerves settled down!  Not doing speed work comes with a price.  Right now, I'm not doing a lot of speed work and that's okay for now.  Come summer, I will be doing lots of speed work for my Fall Marathon!  Big goals there!!!!

My friends and I took photos, laughed and went to get potatoes...I was so happy to eat!  Uberthons does such a great job with their races...I love them!


Sunday was Shamrock day!  Jerry and I had a 7:40am start time for the 15k (9.3 miles) in Downtown Portland.  We got there and parked in a parking garage with no problems.  I do like early starts to races.  I don't have all day to think about it and get worked up.   The temperature was perfect but it was a little windy.  I had to use the restroom one last time and we had about 20 minutes, so I got in line.  About 20 minutes later, it was finally my turn!  I took my turn and Jerry and I took off to the starting line.  I knew there were 1000's of runner/walkers (35,000), it was chipped timed and a staggered start.  I wasn't too concerned about being a minute or two late but we didn't make it to our pace group, bummer! In fact, we didn't have any idea what pace group we were in when we took off.  Jerry had told me ahead of time he was running with me and just going to enjoy the race this year instead of running it super hard.  As our group started, I quickly realized we started too far back.  Starting at a 10:00-10:15 pace wasn't what I wanted for the first few miles.  Shamrock is so packed, that passing people gets difficult.   It's possible, but you have to be very careful and take turns and do lots and lots of weaving.  It's just packed! 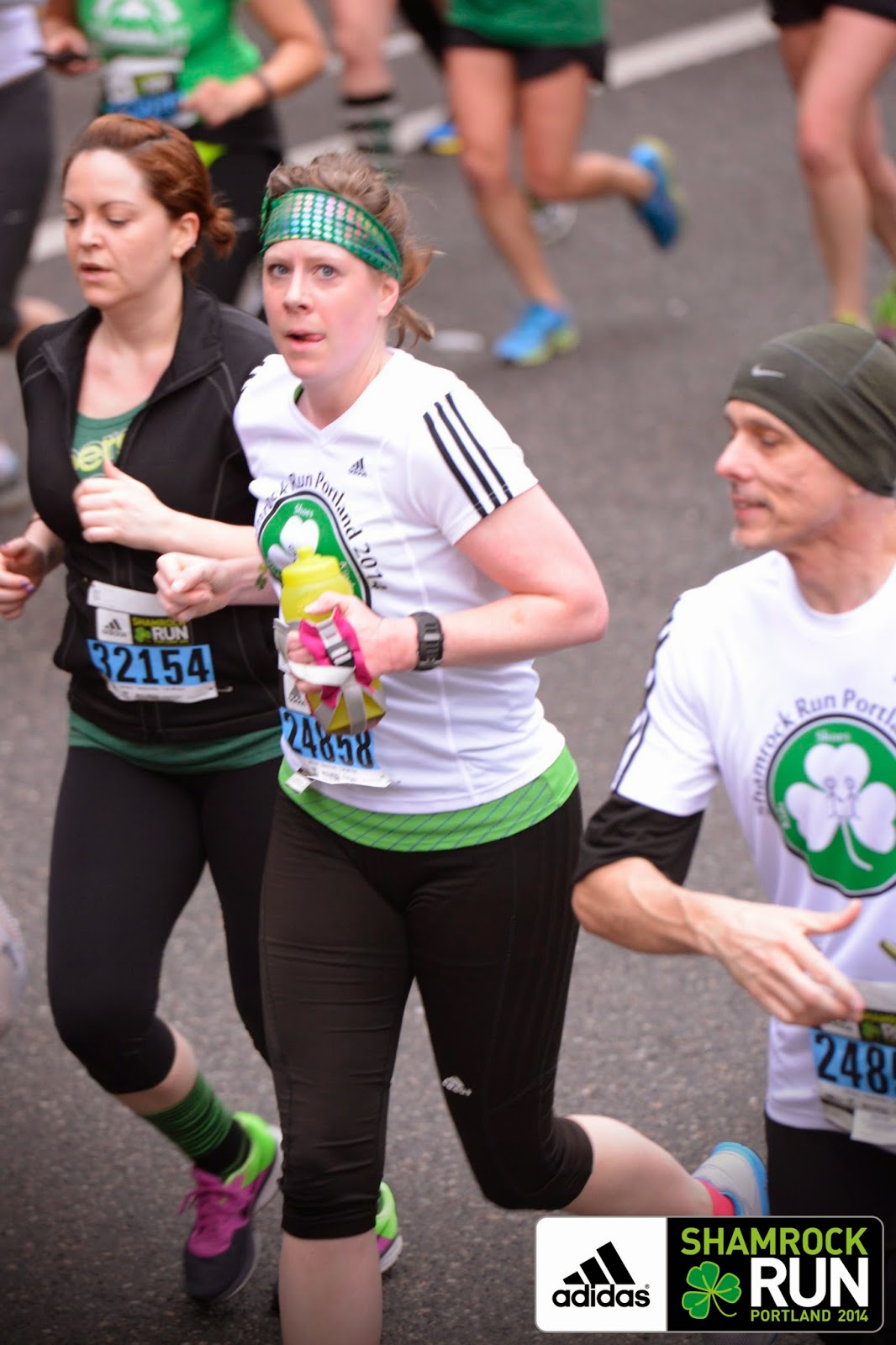 I do think, part of the fun of Shamrock is all the people!  I enjoy small races and I enjoy large "pack the house" races too!  I soon realized, I needed to just calm down and just enjoy it...pass when I could, and enjoy the road!  I loved the sea of green that covered the streets of Portland.  I saw green covered men, superheros, a man that carried the American Flag the whole 9.3 miles.  I saw friends running together, people really struggling to run, ladies in tutus...men in tutus!  My husband running with me!  It was great!  We almost had to stop for a train but made it just across before the bars came down to stop us.


I couldn't believe it when I saw my friend Debbie C. running in that crowd of people!  I had lots of friends running this race, but she is the only one I ended up seeing....so crowed!


A light mist started coming down.  That was really nice, because I heated up fast.  We hit the hill and up up up we went.  I love the downhill parts of the Shamrock.  Going down, I can just fly away.  It's an amazing feeling to fly like that.  I flew for the last couple miles into the finish line with a time of 1:24:06 placing 3045th! That sounds so funny to me.....3045th place!!!  Huge race alright!  Last year I ran this race 2 minutes faster!  My goodness, its a hard race with all the hills and I really needed to be closer to the front of the start...if only runners didn't have to go to the restroom!!!

I had a blast and walked away wanting food!!!!! 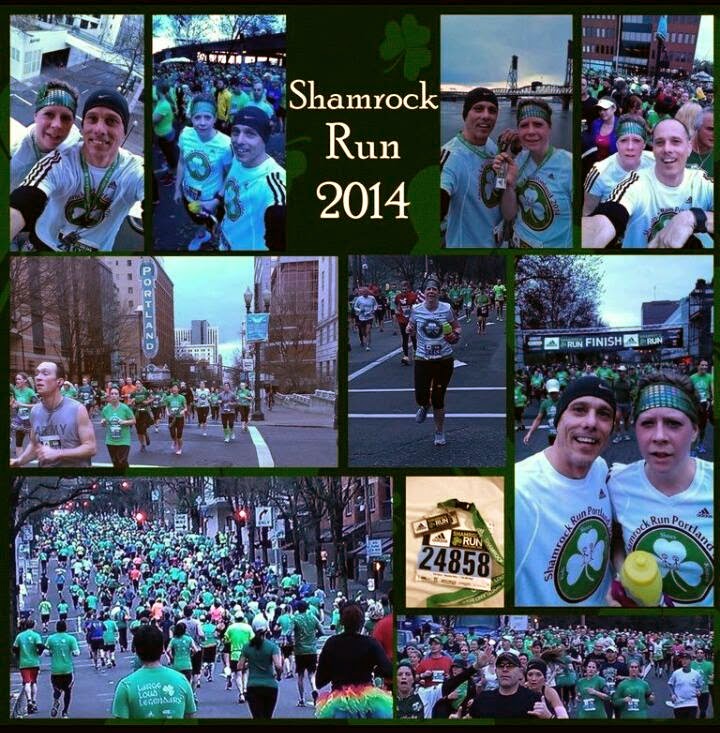 My next race is May 3rd.  The Oregon Spring Half Marathon by Uberthons.  I have plans to do well for this race.  Hopeful for a PR.

My next full Marathon will be October 5th, Portland Marathon.  I have big PR dreams for this one.  My summer will be packed full of intense training to prepare for this one!

I'm sure I will run a few more races here and there!  Let me know what your running on my running page Dallas, OR Run the Open Road.  I love hearing from other runners!  Tell me your running dreams and goals!

Posted by simplyjulie at 8:41 PM