A few months ago I was asked to run on Team Uberthons for Hood to Coast! I said yes!  I don't even like running relays!
Relays are a different kind of beast then a road race.  For a road race, I get up on a Saturday or Sunday and run, get it over and go home!  A relay takes a couple days with lack of sleep, lack of food, lack of rest-rooms, lack of showers, lack of cell-service, and  lack of sanity over the whole weekend! You do this with a van full of people, some you proably have never meet before! It's pretty messed up!
2016 was my fourth time running on a Hood to Coast team. This year, Team Uberthons! I was the fourth runner in van one! Hood to Coast teams are made up of twelve runners, six in each van.  Van one (my van) started at Timberline on Mt. Hood at 9:45 am.  It was a beautiful morning. The sky was clear and it was in the 60's.  You could see for miles! I knew three people in my van. Two I didn't know.  We quickly became close friends.  You have no choice but to bond when you are riding up the Mountain with one common
goal, running 199 miles together without injury or trouble.
Our first runner, Moe took off fast, leading the pack in our starting time. We loaded up and headed to the first exchange spot, checking on Moe as we went by.  He was looking good!
Next runner was Alan, our team captain. Alan is also in charge of Uberthons
events.

Next we had runner Elisa who I was meeting today for the first time.  I have seen her at races, but never have talked to her.  She paces many Uberthons Half Marathons and does an incredible job. Next was me.  When it was my turn it was up to 89 degrees.  It was the bottom part of Mt Hood, a nice little decline in elevation, just over seven miles.  I was excited about this leg until I started running it and felt the burning heat!  My first two miles were good, mile three was still ok.  At mile four and on, I struggled. I was feeling overheated and there was no longer shade like when we drove up that morning. My team stopped a couple times, spritzing me with water and handing me extra fluids to drink.  I got sprayed by a person who was in their yard watching people run by.  I tried to talk to other runners to get my mind off the heat.  I thought about how embarrassing it was going to be to face my team when I got to the next hand-off.
I finally got to my exchange, handed off to Jerry our fifth runner and faced my team. They were wonderful!  They all understood.  Afterall, they all know what it's like to run in the heat! I loved all of them instantly after that moment.
Jerry is my husband and had never got to experience van one. He was running a leg I had run, so I knew the course.  I knew he was running a hard first leg, but also knew he could handle it! He is a very strong runner and does better in the heat than most people.
Jerry handed off to DuWayne, our sixth and final runner for van one.  DuWayne is a new friend.  I had only meet him at a Hood to Coast planning potluck.  He specialized in Tri races.

DuWayne came in strong and handed off to van two.
We were hot, tired and hungry.
In van two we had team members
Brent (turning 40 during H2C)
Eileen (the beauty who let us shower and dig for snacks at her house)
Lora (a super fast energetic runner)
Jeff (a fast runner with a super awesome dog).
Josh (a super fast runner)
Michelle (a really awesome Uberthons Ambassador)
Unfortunately I didn't get to spend much time with this great group, as we were split up.  We exchanged some quick info with them and as they started running for our team.  We went to Eileen's for showers and then to grab a bit to eat.
We ate at the Safeway by Eileen's house.  Half of us started at the Safeway Starbucks with a Lime Refresher.  We tried to talk the guy working into joining our team and running one of our legs.  He was not interested!  We then made our way over to the deli area.  For some reason rice seemed to be the pick.  I got some sushi, and others got fruit.  Rice was the one thing everyone was excited about. We bought our food and sat over in the Starbucks area.  If you came to that Safeway Friday evening, I apologize. You heard things like, "This is the BEST. RICE. EVER." Someone singing "Ice Ice Baby". Someone giving pressure to so the sushi dance.  Lots of laughter. Talk of "where did that Sprite come from?" Talk of how  the Starbucks guy should join our team! And again, BEST. RICE. EVER.  I know, you had to be there, but it was hilarious. Not even kidding!
We quickly got back on the road still in awe over the rice.  We needed to get to the next major exchange to rest before van two arrived. Traffic was annoying, but that's to be expected in the Portland area.
We didn't rest much, we parked and then walked down under Hawthorne bridge and
enjoyed the port-a-potties and the fun going on around us. We got a hilarious team photo at the GNC booth.  I saw Lisa from my Epic Relay team.  We watched hundreds of runners go by. It was a beautiful Portland evening.
About 7:00 pm van two, handed off to us and we were running our second legs.  The sun was going down, and it was starting to cool off but it was still warm. I ran at 10:00 pm and it was still 81 degrees out.  This leg was just under four miles for me.  Most of my team struggle some with leg two because of the heat we had been in all day.  This was a hard leg for most of us.  We all pulled together and cared for each other.  Making sure water was available, making sure we had time to rest before taking off in the van again.  Giving out iced towels.  We had entered "survival mode."


We  managed to make it, and handed off to van two around


11:30 or so.  We headed to a race directors house name Molly that Alan knows.  She feed us the BEST Spaghetti in the whole world, let us cuddle her new baby kittens, take showers and crash in her living room for a bit.  It was wonderful!  Thank you Molly for your wonderful hospitality. We had to get going to drive to our next major exchange point.  We made it to Mist safe and sound.  If felt like a very long dark drive.  DuWayne drove us into the night and I was so thankful the team hadn't asked me to drive.  We got to sleep for about 1.5-2 very short hours. Since we were in a 15 passenger van (thank you Kim), we all just slept in there.  None of us rested in the sleeping field.
EARLY Saturday morning, about 4:00 am Alan rudely awoke us with the lights turning on, and a, "are you ready to run?"  Moe and Alan needed to switch legs so Alan was running first.  Moe volunteered to go with him to the handoff to connect with the other half of our team and get the hand off times.
It was very dark out and we were in a huge field full of large vans.  We had just been rudely awaken and all just sat in a daze while Moe and Alan walked off.
After a moment Elisa, Jerry and I realized we better go to the Honey Pots now or we would miss out.  DuWayne still just sat there in a daze. While standing in line, we heard 6-1-0 being called out (meaning our runner was in).  We knew this was a shorter leg, and so in a panic we went back to our van and decided we could wait for the next exchange.
We got to our van and Moe was nowhere to be found!  DuWayne hadn't seen him!  It was very dark out and I don't think he was hardly even awake yet.  We did all we could at the moment, just sat there, waiting!  After a good ten minutes Moe opens the van door all worked up!  "I couldn't find you!!!" It was horrible and hilarious all at the same time.  There were just rows and rows of crazy Hood to Coast vans in a dark field.  Moe wasn't even sure what way they had gone.  I'm so glad he found us! We had to go now! We saw Alan running down that dark country road as we went by.  We made it to the exchange before him, despite the confusion on where the van was parked in that dark overflowing field.
We took our turns in the Honey Pot and we were back in business, we were running again! It wasn't hot like it was for day one.  It was a beautiful summer morning and we were out on beautiful (hilly) country roads. The sun was rising, it was a new day!


I started running my last leg about 7:00 am and it was 57 degrees.  Most days, I would call this warm running, but it was now cool running!  It felt so good to be running in cooler temps and in the morning air!  I had lots of rollers (small hills) to run over but it was only 4.09 miles.  I had run faster for leg two but felt the best for this leg.  I handed off to Jerry and was so so so happy! Three more runners in our van and then we got to head to the beach.  Jerry, Elisa, and DuWayne all finished very strong that morning! Moe, Alan and I had a few struggles but all made it!!!
We got to talk with van two for a little longer this time.  I saw several running friends at this exchange. That's always fun!
Van two took off strong and we drove to the beach!
My van was able to take showers again at a teammates beach house. I've never had so many showers for a relay!  It was nice!
After van two made it in, we all joined together for the finish line and finish photos!  What a great adventure we all had!
A few fun moments from the team (and it was 100 times more funny if you were there)
~"Put the van in PARK Brent"  ~Eileen (never a dull moment)
~Lora and Eileen getting bombarded by other women asking about our "awesome team shirts" and how to get them. Sorry girls, you have to be on #TeamUberthons.
~Van two losing our team flag twice and the guys having to chase it down!
~Bugs in Jerry's pistachios
~Sprinklers on in people's yards to cool off the runners (thank you folks who live along the route)
~A lady handing out Gatorade at 1:30 am.  Yes, it was still warm out and extra fluids were what we needed! 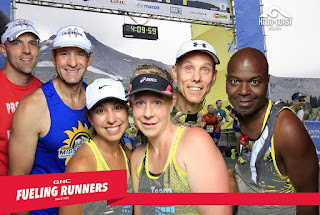 Posted by simplyjulie at 7:49 PM 2 comments: