Are you looking for a good half marathon to run in August?  Join me for the 2nd Annual Albany Half Marathon  on August 16th.

This 13.1 mile loop course starts and finishes at Timber Linn Park.  There will be plenty of parking and it's just off I-5 and easy to find!  This is a great beginners course.  It's a great Hood to Coast warm up.  Also, a quick course for the seasoned runner looking for a PR.  Feel free to register as a walker and bring your baby in a stroller and/or dog along for the walk/run! This race will have professional chip timing by Eclectic Edge.  All finishers will receive a dri-fit t-shirt and a medal at the finish line!
There will be top ten male/female awards in each age group.  Last year a cool medal water bottle was the award.
The course will take you through local farms and have a small incline about mile 6.  There is a section of rolling hills.  It is a beautiful course and all race proceeds and sponsorship go to Albany schools!
For more information on how to get involved with this race contact Bryce Bennett at (541) 730-0413 or bryce.bennett@albany.k12.or.us

You will be want to know: water stations will be along the course about every two miles.  You will also find two nutrition stations and a porta potty at mile 6.5.
You can come park as early at 5:30 am.  Pick up race packets as early at 6:00 am.  If your walking, your start time is 7:00 am and for runners, 8:00 am.  After the race, awards will be handed out at 10:30 am. 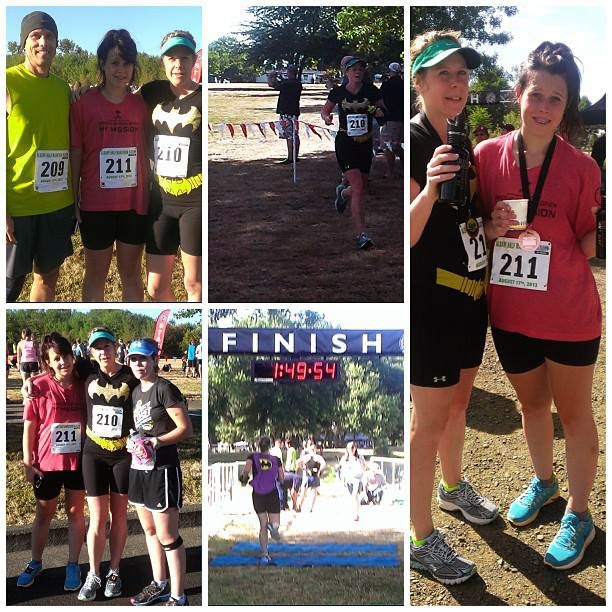 Last year I ran this and struggled a bit when I got to the rolling hills.  I plan on going back this year to PR the course.  I hope to see you there supporting the Albany Schools!
You can view the course map here.
An entry form can be found here.
From now until August 14th your can register for $55 (includes dri-fit shirt)
After that, price will go up to $65
Register on-line here.

Posted by simplyjulie at 9:54 PM No comments: 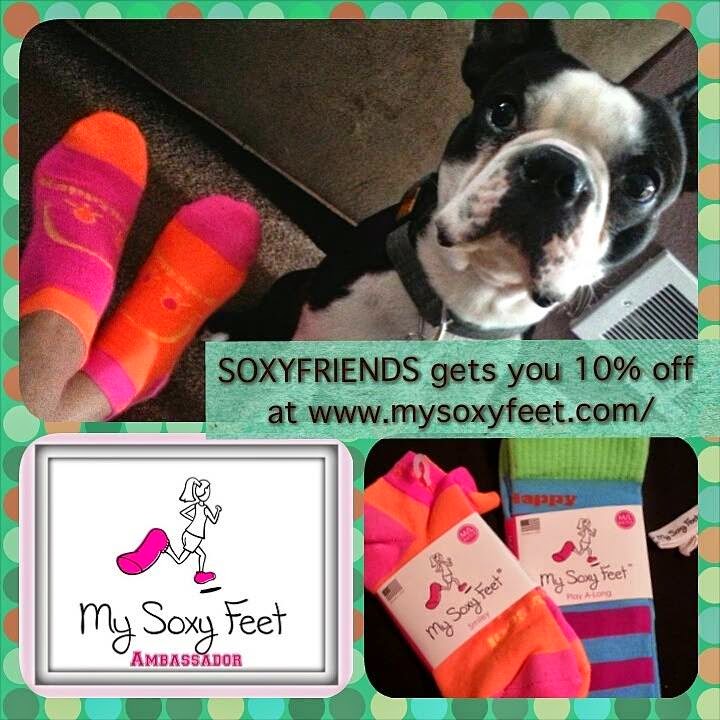 Recently I became an "My Soxy Feet" Ambassador, meaning, I wear My Soxy Feet  Socks. I also help promote My Soxy Feet and get to offer you a discount. 10% off here.

I like how bright and fun "My Soxy Feet" Athletic Socks are.  They are not only fun to wear, but are awesome running socks  I have worn mine many times and never got a blister.  My Soxy Feet are a High Quality Athletic Sock that are securely woven with CoolMax, Ecomade fibers to keep feet dry and sweet, NOT sweat smelling!  They have a mesh top to allow ventilation and extra sole cushion for added comfort and durability.  The heel/toe cushion provides comforts and helps protect the foot on impact. 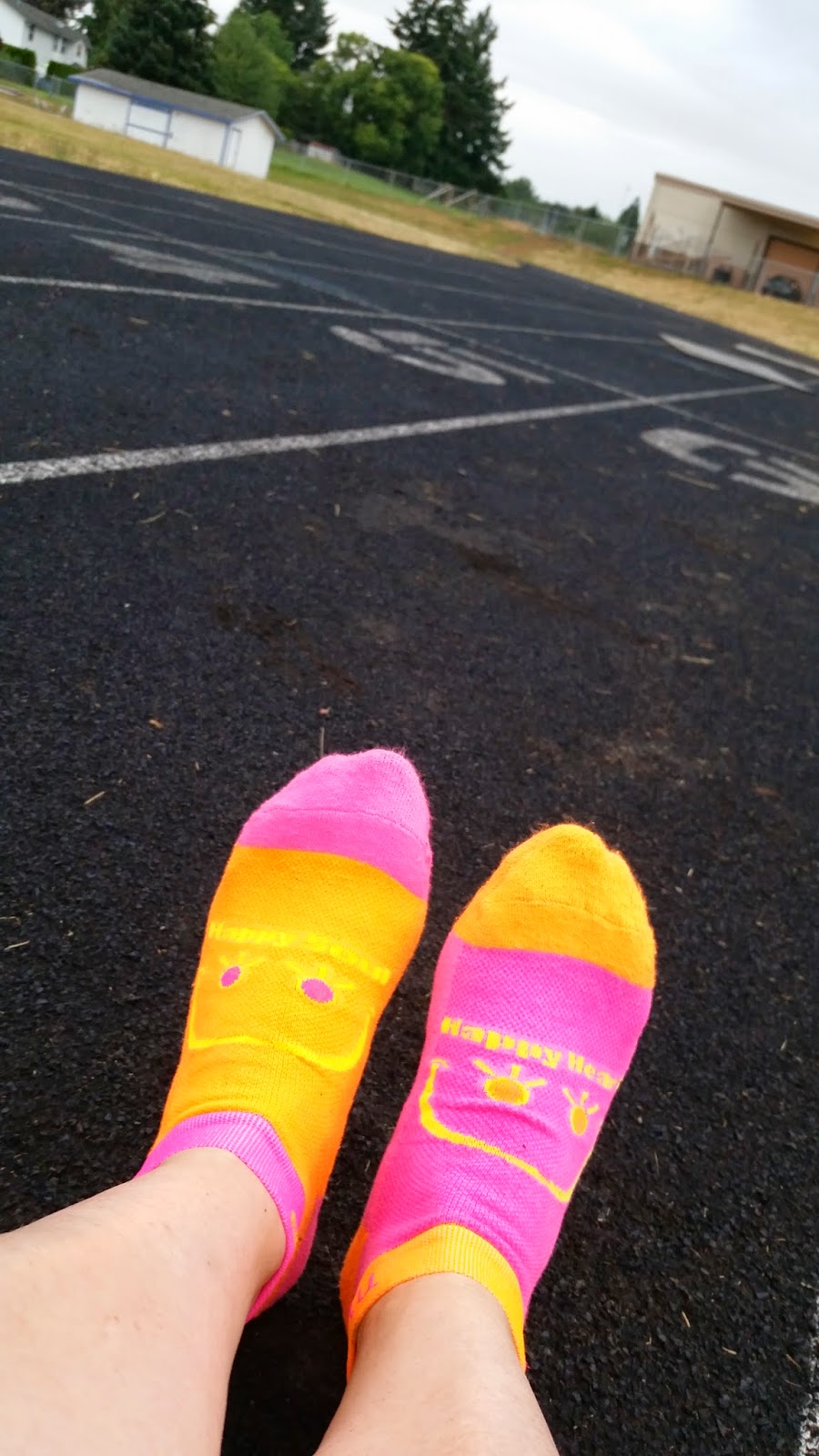 I am excited to announce Melissa, from My Soxy Feet has offered to let me give a pair out for one of you lucky readers to try!  I am sure you will love them as much as I do!

Simply enter below.  A winner will be announced on the July 29th!  Good luck!  Prize includes one pair of  low cut My Soxy Feet Athletic Socks of your choice (knee socks excluded).  US ONLY! Winner will have 48 hours to claim their prize after winner is picked.

a Rafflecopter giveaway
Posted by simplyjulie at 9:17 AM 17 comments:

Saturday morning I set out for a 17 mile training run at 8:00 am.  I was pretty tired from selling fireworks all week, but none-the-less, the long run was needed for my upcoming Portland Marathon! My husband Jerry is also training for the same race and joined me.  My Ultra runner friend Chris also came along.  He is always willing to run ten miles or so!
We headed out of town towards Baskett Slough.  Everything was going well for the most part.  As we came to Baskett Slough we stopped for a second.  We were almost to mile six and I was beginning to feel pretty warm.  By this time it was nearing the high 60's and felt humid.  We set off on a country road, one I've never been on.  It seemed like great Hood to Coast training.  Some rolling hills and lots of gravel. 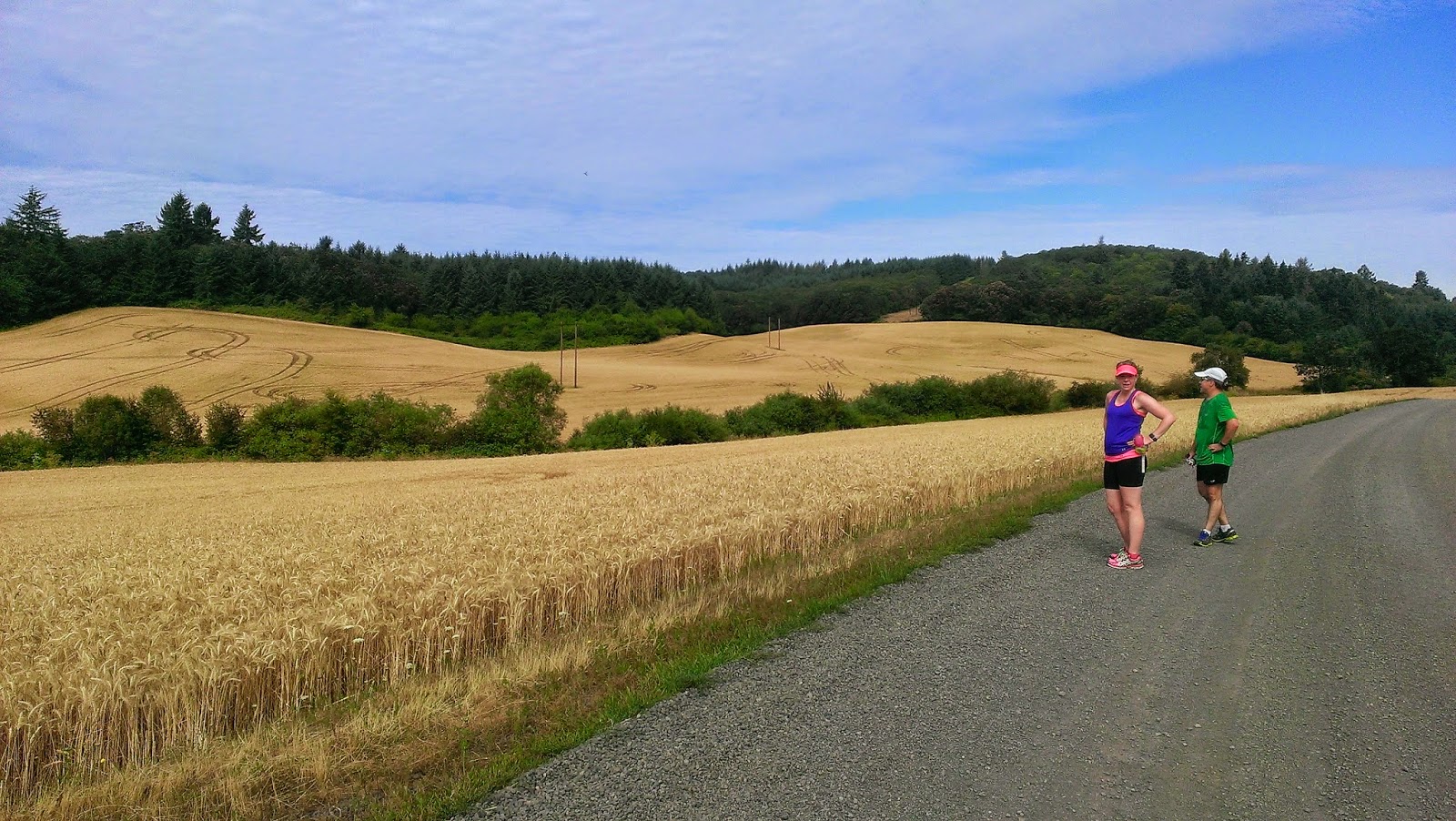 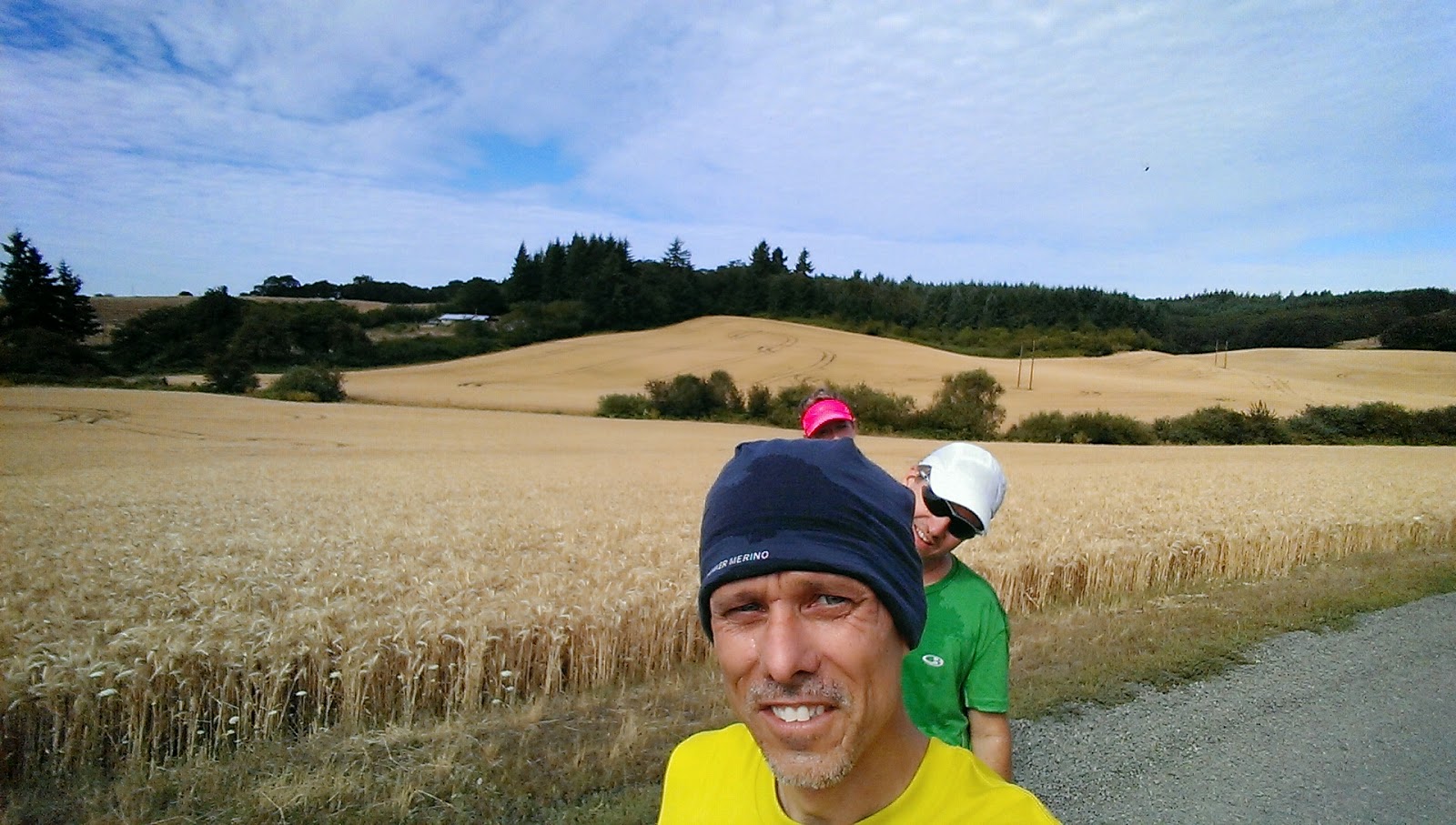 By this time we were well into our run. As you can see from the pictures we were surrounded by hay fields.  Chris was having allergy issues, I was freaking out because I was almost out of water and was sure to overheat and die. Jerry was really tired from a week of long work hours.  As we ran along we heard an animal in the hay.  Could of been a fox, cougar, maybe just a snake.....who knows?  We just kept moving! It really was a beautiful day!
Around mile ten or eleven we came to a house out in the middle of a field (the middle of nowhere) and an elderly lady was outside washing some berries off her dishes with the water hose.  One of the guys said, "hey....there's you some water!"  At first I kept going, then I couldn't help but think, "I only have about one slurp left and about five miles left."  I turned and ran up to her.  I asked if she would please fill my water bottle up.  I didn't really give her a choice, I was desperate for water!!!!  She turned the hose off, took my bottle and went inside!  She soon came back and handed me my bottle full of water.  I thanked her and ran off to catch up with the guys.  Chris informed me she probably went inside to slip something into my water but I took my chances!  I was so thirsty!
We crossed back over Hwy 22 and were heading back on Kings Valley and I started to feel sick to my stomach when I would speed up.  I kept telling myself, only about 4.5 miles left, only about 3 miles left.  I would even say it out loud to the guys sometimes.  They seemed to be struggling too.  We walked a few times.  That helped. But the running felt terrible.  My legs were fine, just felt overheated and sick to my stomach. 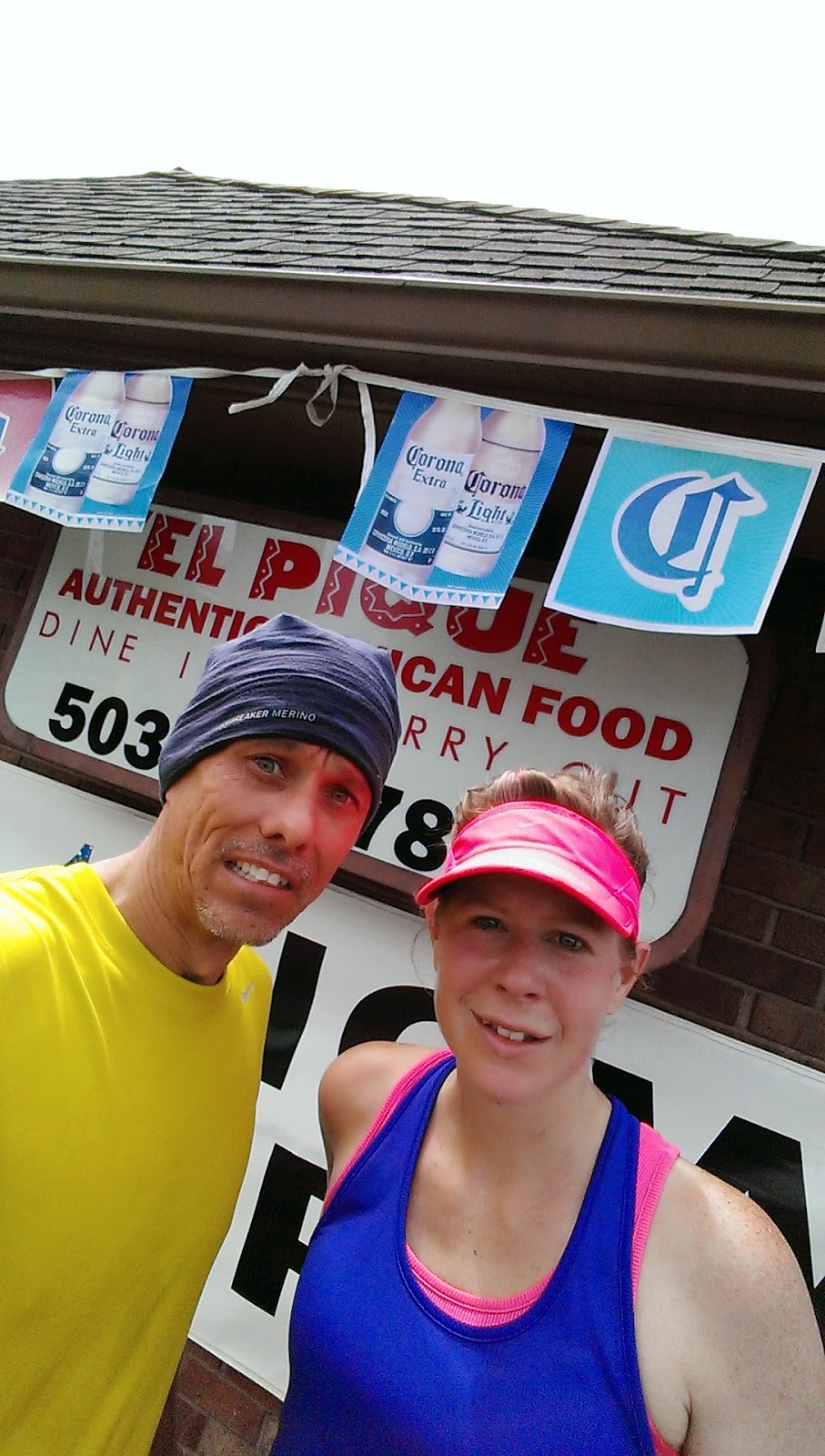 The plan was to run back into Dallas and eat breakfast at El Pique.  That would put us at about 16 miles.  It was another 1.3 miles to my house.  That would make for a nice cool down walk after eating breakfast.


As we got into town, we were really close to Chris's house.  He said, he needed to go home (he wasn't feeling well).  Jerry and I cut through Wal Mart parking lot and went to El Pique (exactly 16 miles).
It was about 11:00.  It was now in the 70's and I was so glad to go into the air conditioning.  Thankfully nobody was in El Pique eating because I needed to walk around.  I was overheated and just sitting down wasn't good.  The cook came out and said, "you guys look tired."   When I finally did sit down, I felt like I may throw up.
I ordered an omelette with fresh strawberries on the side.  When it came out, I ate a bite.  It was so good, but I instantly felt like it was a very bad idea to eat right now.  I was really feeling ill.
Instead of our cool down walk home, we packaged up our food in to-go boxes and Nancy (waitress at El Pique) took us home.  She let two sweaty, stinky, sickly runners into her car and drove us home! Now that's service like I've never seen before!
I showered, got my body temperature down.  Drank some Vega Sport Recovery  and then felt like I could eat...finally a couple hours later!!!!!!  That omelet and fresh strawberries tasted wonderful, and I kept it down!
Sometimes it's good to have a bad run.  I would prefer to never have a bad run, but it's a good reminder that running is hard. Those good runs come, and it's worth every bad run when you finally get to that race you've been training for!
One of the joys of running is, you never know what's going to happen out there.  Running is an adventure! I'm looking forward to a good 18 miler next weekend and I plan on going out earlier than 8:00 am next time!    A long run in the summer heat isn't for me!

Dallas OR Run the Open Road

Posted by simplyjulie at 9:09 PM No comments: